Excerpt from: Supply Chain Brain | By: Maritime Executive| May 19 2015

The U.S. Army Corps of Engineers announced plans to draft a supplemental environmental impact report looking into expanding an area of the Mississippi River Ship Canal between Baton Rouge and the Gulf of Mexico. The plan will deepen the section of the river from 45 feet up to a maximum of 50 feet in order to accommodate larger vessels destined for the Panama Canal.  The said 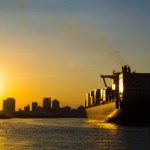 Corps, “There may be economic justification in expanding port projects to accommodate post-Panamax vessels.”

The plan has been under consideration since the 1980s, when an environmental impact study originally recommended deepening the navigational channel between Baton Rouge and the Gulf of Mexico to a depth 55 feet.
{Photo Source: Depositphotos.com/ricardoakuh}

Shipments on the Mississippi River are made up largely of grain supplies heading from the U.S. heartland to foreign markets. The World Trade Center of New Orleans and groups representing maritime interests released a report in December which showed that a group of five ports in Louisiana handle around 75 percent of U.S. grain exports. China in particular is a huge importer of U.S. rice as rice prices in China are held high to protect domestic farmers.