The Scarbrough Group of Companies, headquartered in Kansas City, Missouri, USA, is pleased to announce its growth and expansion plan, starting first with its appointment of new President and Chief Operating Officer, Mr. Adam Hill.

The announcement comes from founders Roger and Jeannie Scarbrough, who lead the Group’s Board of Directors. “When we founded this company 35 years ago, it was always my goal to grow the company to where it did not need me as the leader or the face of the company. With this new appointment, I can honestly say I have accomplished my goal,” Mr. Scarbrough said. He added, “Adam is one of the hardest working people I know. His dedication to our company, our values, our culture, our team, and our industry are unmatched. I am excited about his ideas, his ability to lead, and the opportunities in the market he will capture.”

Mr. Hill was hired by the company in 2006 as an Import Operations Account Representative. He has since held various roles within the company of increasing responsibility, most recently as Executive Vice President of the Group. In his time with the company, Adam has led Scarbrough to become one of the first twenty customs brokers in the U.S. to utilize the Automated Commercial Environment (ACE). He also brought the Simplified Entry pilot program to Missouri airports, enhancing security and speed of U.S. Customs release for air freight shipments. 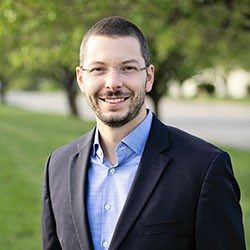 “I am honored and humbled to be appointed by the board to this role. I am truly standing on the shoulders of giants with Roger and Jeannie Scarbrough having built the company to what it is today. I am fortunate to have experienced their leadership and mentorship since I started at Scarbrough,” he said. Adam added, “I look forward to leading this company over the coming years and taking care of our core business, our customers.”

Adam has served as an invited speaker at local, regional, and national levels on various topics, including: ACE, the North American Free Trade Agreement, and the changing role of the customs broker. He also shares his industry expertise through Scarbrough University, a training platform that hosts webinars and seminars nationwide. Adam is a member of the U.S. Customs and Border Protection (CBP) Trade Support Network (TSN), where he provides input on the design of modernization projects. He also serves on the TSN eBond Committee, which developed eBond processes for trade implementation.

Adam is a proud graduate of William Jewell College, where he was first introduced to Scarbrough through a college internship. He also holds an MBA from the Fogelman College of Business & Economics at The University of Memphis.