I’ve heard of autonomous vehicles, and still am baffled how amazing technology can be, but autonomous ships? Do they really exist? The answer is yes!

The first part of May marked the announcement of partnership between Norwegian maritime-technology firm, Kongsberg Gruppen ASA and fertilizer manufacturer, Yara ASA to build the worlds first automated cargo vessel.  The plan is to release the Yara Birkeland to sail on its own in 2020. The electric ship would be controlled simply by a joystick.

The commercial rationale for autonomous ships has long been clear. The U.S. Coast Guard has estimated that human error accounts for up to 96 percent of all marine casualties. A recent surge in piracy is a grim reminder that crews remain vulnerable (and valuable) targets for international criminals. Perhaps unsurprisingly, the industry is facing a chronic shortage of skilled workers who want a career at sea.

There are many other reasons an autonomous ship will be more economical.  The ship could weight 5% lighter, burn up to 15% less fuel, wouldn’t have the overhead, living quarters, wages, etc. of manning an entire vessel with humans aboard. 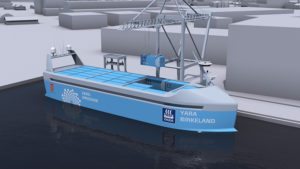 The Yara Birkeland will launch in 2018 with man aboard during trial runs. The ship will transport fertilizer from Yara’s factory to ports about 16 miles away, replacing 40,000 shipments per year of diesel trucks. So, yet another win … less pollution!