The most important World Trade Organization pact since 1995 has just been made that could very easily effect several economies across the globe.  This is the first major global trade deal in nearly 20 years, as 160 countries agree on measures to boost the world’s economy.

According to CNN Money, the “Bali Package,” formed on the Indonesian island of Bali, is an agreement to simplify customs procedures and speed up the flow of goods.  “This package could cut the costs of trade by 10-15%, according to the OECD, by slashing paperwork and easing border delays and transit bottlenecks.”

” The WTO said the deal, if enough countries sign up, would provide an annual global benefit of between $400 billion to $1 trillion because it would shave 10 percent to 15 percent from the regulatory cost of importing and exporting, and could stimulate more trade and allow countries to collect more revenue at the border.” (American Shipper) Some of the achievements from the agreement have been to simplify cross-border transactions, increase transparency, and reduce delays and costs.

Furthermore, there are twelve countries taking part in the Transatlantic Trade and Investment Partnership, which will reduce barriers to trade. Australia, Brunei, Canada, Chile, Japan, Malaysia, Mexico, New Zealand, Peru, Singapore, the U.S. and Vietnam, together make up 40 percent of the global economy and continue to reach agreements to improve international trade. 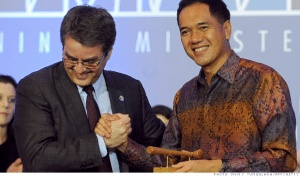