… it was referred to as Break-Bulk Shipping

For many thousands of years, mankind has shipped goods across the oceans, from one land to another. Think of the great seafaring peoples; the Phoenicians, Egyptians, Greeks, Romans, Portuguese, Spanish, British and many more. Sailing the world looking for new treasures, they brought home and traded food, jewels and materials that their countrymen had never seen before.

But the process was never easy. The loading and unloading of individual goods in barrels, sacks and wooden crates from land transport to ship and back again on arrival was slow and cumbersome. Nevertheless, this process, referred to as break-bulk shipping was the only known way to transport goods via ship up until the second half of the 20th Century. 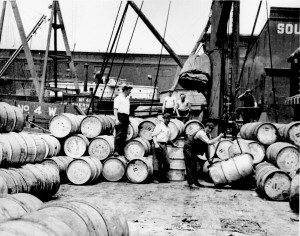 The loading and unloading of the ship was very labor intensive. A ship could easily spend more time in port than at sea while dockworkers manhandled cargo into and out of tight spaces below decks. There was also high risk of accident, loss and theft.

There were some basic systems in place to make the process more efficient, such as the use of rope for bundling timber, sacks for carrying coffee beans, and pallets for stacking and transporting bags or sacks. However, industrial and technological advances, such as the spread of the railways in the 18th century, highlighted the inadequacies of the cargo shipping system. The transfer of cargo from trains to ships and vice versa became a real problem.

Before the container shipping industry emerged, boxes of various types and sizes had often been used in transporting cargo simply because they were the logical way to move things en masse from one location to another. However, despite these developments, cargo handling was almost as labor-intensive after World War II as it had been in the mid-1800s.

Excerpt from the World Shipping Coucil