BNSF has made good progress toward its $5 billion capital investment goal for 2014, bringing service levels back up to where customers expect, and preparing for the fall harvest, according to a letter to customers.
In the letter, John Miller, the railroad’s group vice president of agricultural products, wrote that BNSF has received “about half” of the 500 locomotives it has ordered for 2014. In its quest to hire 5,000 new workers in 2014, Miller said they have already welcomed 4,000 new employees.
“As capacity is added a siding and a segment at a time, we will expect pronounced velocity improvements,” he wrote. “We have also been making significant progress on reducing past-due orders and will continue to greatly reduce the total number that now stands around 7,000 cars.” 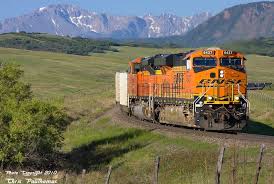 He added that the goal is to get the past-due number to less than 2,000 cars by the middle of September. A coming strong harvest, he wrote, makes a zero past-due result an impossibility, but he does foresee service improvements, when compared to last fall.

Miller went on to say that the Surface Transportation Board is keeping a close eye on BNSF fertilizer shipments and past-due grain orders. While the railroad is complying with the STB’s request to provide weekly updates about grain shipments, Miller wrote that the railroad “is concerned with some of the implications” of the STB’s decision to focus on past-due orders.

“We believe our mission is to move as much volume as possible given the limits of our network capacity,” he wrote. “We believe we best accomplish this by balancing the capacity allocated to single cars versus shuttles. Intervening in that balance will have the unintended consequence of reducing the amount of grain moved; less than the market needs us to move; or that the railroad is capable of handling.”

He added that the STB’s order might encourage customers to “seek regulatory intervention.” This, he wrote, will pit regions and commodities against one another, which would damage the system and compromise the network. He noted that ethanol shippers have already asked the STB for a ruling on their product.