Truckers back to work after Strike

Brazilian truckers went on strike since before February 24, 2015 causing scarcity among local markets for products such as fuel and vegetables.  Truckers blocked the main highways of the country, allowing only light vehicles and trucks carrying perishable goods or livestock to pass through.

The objective of the strike was to reach better work regulations for truckers, as well as better road conditions and lower fuel/toll costs.  An agreement was reached on February 25, 2015  and the Government compromised to follow through on their part of the agreement once all roads nationwide were unblocked.

Truck transportation is vital for the Brazilian economy, since the government decided to heavily invest on the industry (under pressure from big multinational automobile companies) back in the 1950’s, abolishing almost all of the investments on other transportation modes, causing Brazil to have a very small and inefficient railroads and waterways network at the present days.  — DC Logstics, Scarbrough’s partner in Brazil

Excerpt from Reuters | By: Caroline Stauffer and Marcelo Teixeira  |  March 2, 2015 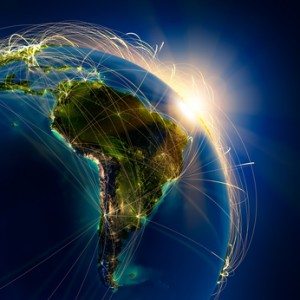 Striking truck drivers resumed some roadblocks in Brazil on Monday, disrupting grain and meat shipments to southern ports even as the government cracked down on protesters and promised to give new benefits to the transport sector.

By mid-afternoon there were 23 road blockages in three southern states, down from 99 points nationwide a week ago, the federal highway police said.

Access to the country’s main poultry exporting port of Itajai in Santa Catarina has been blocked since Friday, affecting meat packers BRF SA and JBS SA, a port spokesman said.

A BRF spokeswoman said the company had reopened all the plants it had to close as a result of the strike and animal feed was being transported to farms.

The country’s No. 3 soy exporting port of Rio Grande, in Brazil’s southernmost state of Rio Grande do Sul, said 70 percent of its operations were affected.

The nearly two-week-old movement has slowed grain deliveries, delayed soybean harvesting due to lack of diesel fuel and forced meat-processing plants to close.

A spokesman at the Port of Paranagua, the country’s second-largest soybean export point, said its stocks were running low and could run out by Tuesday or Wednesday if more trucks did not arrive.

Even so, March soybeans on the Chicago Board of Trade fell 1.84 percent and traders said their concerns over the strike had eased.

A spokesman for Rota do Oeste, which operates the BR-163 highway in top soy-growing state Mato Grosso, said there were three protests on the route. The federal highway police did not include any roadblocks in Mato Grosso in its latest report.

Though he said the law would do little to address protesters’ main concern over high diesel costs, Diumar Bueno, the president of the National Confederation of Autonomous Transporters, told members to stop the protests.

“They can’t afford to remain on strike anymore, they need to work,” Bueno said, urging protesters not to heed a call by some truckers to travel to Brasilia to protest.