Chris Dupin writes, “Update: The Port of New York and New Jersey said that gates at marine terminals are expected to open as scheduled on Monday and that full operations are being restored after longshoremen walked off the job Friday morning.   On Friday night, the leadership of the International Longshoremen’s Association, urged its rank and file members in the port to accept orders and return to work immediately.   The New York Shipping Association, which negotiates the local contract for employers with the ILA the unauthorized walkout was “extremely disruptive and in violation of the NYSA-ILA Collective Bargaining Agreement.”

In a statement issued Friday night, the NYSA said an emergency contract board meeting was held at 3 p.m. Friday afternoon, which resulted in a deadlock.

“An arbitrator issued an award finding that the work stoppage was a violation of the no strike provision in the contract and ordering the officers of the ILA and its constituent locals in the port to inform their members of the same. During this time discussions took place between the ILA and NYSA with regard to outstanding issues concerning chassis, jurisdiction, hiring and technology. It was agreed to expeditiously seek solutions to these longstanding issues.The ILA urged their members to return to work and we expect operations to resume this evening.”

Jim McNamara, spokesman for the International Longshoremen’s Association said union leaders are trying to get members to return to work. In addition to complaints by longshore workers about the Waterfront Commission of New York Harbor, he said there have been concerns expressed  by some about possible future outsourcing of chassis maintenance.

The Retail Industry Leaders Association (RILA) expressed dismay about the walkout, saying “the unexpected strike has retailers concerned that a prolonged strike could hamper economic growth and wreak havoc on spring deliveries. A slowdown last year on the West Coast created a logistical nightmare for American exporters, manufacturers and retailers that depend on our nations’ supply chain to move goods across the country.”

“This is déjà vu for retailers, and an unwelcome start to 2016. A shutdown on the East Coast of any meaningful duration will have dire consequences for those dependent on spring inventory deliveries,” said Kelly Kolb, vice president of government affairs for the RILA. “A long-lasting strike would ultimately impact thousands of jobs along America’s supply chain.”

“Given recent unrest in the markets, a self-inflicted wound like this is also the last thing the economy needs,” said Kolb. “Hopefully this walkout will be resolved quickly and operations will be back to normal on Monday.”

Friday, January 29, 2016 — The Longshoremen have staged a walk-off at the Ports of New York and New Jersey.

According to a tweet by the Port of NY and NJ, no new trucks will be allowed to queue on the port roadways. 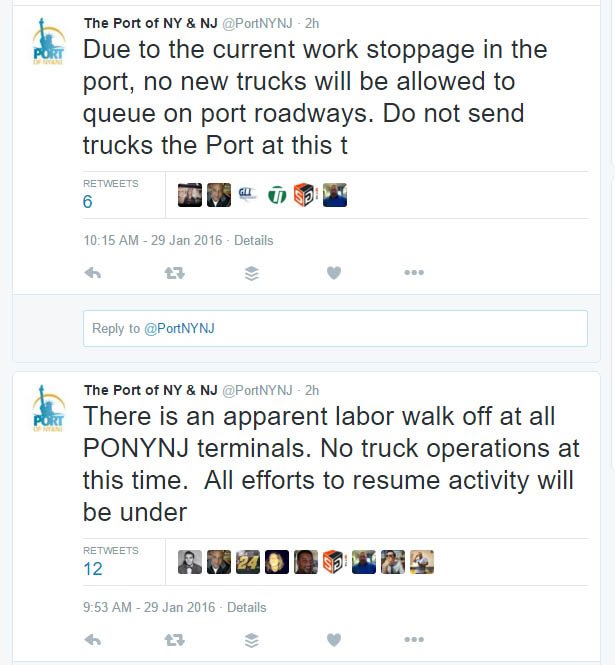 According to NBC New York,

“Law enforcement sources tell NBC 4 New York that about 1,000 strikers shut down Port Newark and the Global Facility in Bayonne. The sources say that truckers are locked in the ports and cannot leave.

It’s not immediately clear if there was a work stoppage at all of the terminals in New Jersey and New York. There are terminals in Newark, Elizabeth, Bayonne, Staten Island and in Red Hook, Brooklyn.

Attempts to reach the International Longshoremen’s Association, the union for port workers, have been unsuccessful. A number for the union’s national office included a recorded message indicating offices were closed until Monday.”

According to Journal of Commerce,

“There was no official confirmation of the cause of the walkout. However, multiple sources said it was due to ILA unhappiness with hiring rules of the Waterfront Commission of New York Harbor, which oversees port hiring.

The ILA walkout came as New York-New Jersey terminals were struggling to catch up after a four-day weekend shutdown from Winter Storm Jonas, and a three-day holiday the previous weekend for the Martin Luther King Day observance.”

Scarbrough International, Ltd. will continue to monitor the situation closely and will keep you informed.  Any questions, please email info@scarbrough-intl.com.