California’s oranges are rotting on the docks

Meanwhile, Japanese electronics and Chinese clothing items are bobbing in the ocean within view of the shore.

The Pacific Maritime Association has accused the International Longshore Workers union of creating a work slowdown that has turned harbors into parking lots and shipping containers into putrid garbage bins. 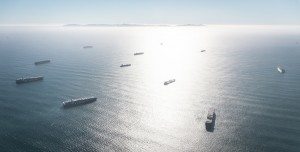 Right now, the giant container ships that are the United States’ pipeline of material to and from Asia are sitting idle in the ocean off of the West coast.

There’s no labor or equipment available to load and unload goods, the port association says.

Negotiations between the management of twenty-nine West Coast ports and the longshore union began when the contract for around 20,000 port workers expired in July.

Empty shelves aren’t a problem, yet.

That’s because retailers planned in advance “to make sure that it didn’t interrupt the holiday shopping season,” said Jason Brewer of the Retail Industry Leader’s Association. But “they’re sort of running out of tricks,” he added.

The ripple effects of the months-long contract dispute are, however, beginning to show up in less visible ways far inland.

Auto industry workers are running out of things to do.

Honda said on Monday it would “stop or reduce production on multiple days” at six facilities over the next week because of “parts shortages.” Spokesman Mark Morrison said the company is running out of transmissions and electronic parts.

Toyota and Subaru also said they would modify their operations.

The makers of furniture and snowshoes are losing business. Salt, metals and electronics, bound for the U.S., are stuck at sea.

Companies whose products do make it through the ports are struggling to find independent truckers who can take their products on the next stretch of their journey, said Marianne Rowden, the president and CEO of the American Association of Exporters and Importers.

Exporters are struggling, too.

Among the largest exports from these ports are meat and dairy products, followed by other foods like produce and canned foods, according to an analysis from the National Retail Federation.

The North American Meat Institute said its industry is losing $85 million every week while cuts of meat and poultry sit in freezers, waiting to be shipped overseas.

Apples and pears and that would normally be bound for Asia were also held up. These growers do much of their business from December through February, driven by demand around the Chinese new year.

In fact, Washington’s apple crop is the largest in state history. Growers are dumping unused apples into canyons, according to Marc Spears of Chelan Fresh Marketing, which represents about 400 growers there.

About 70% of U.S. imports from Asia come through the impacted ports, and the National Retail Federation estimates the impact of a full strike or lockout could total $1.9 billion per day.

Some, however, say those costs are overstated because companies will eventually need to find alternative shipping methods.

“While (the ports are) one of the most important routes of goods getting in and out of the United States, it’s not the only route,” said Chris Thornberg of Beacon Economics.

But alternatives, such as routing ships to East Coast ports or shipping goods by air, is expensive.

What keeps the costs down for sea travel is size. The largest ships used by Maersk Line, the world’s largest container shipping company, can be packed with 18,000 of the standard 20-foot containers.