After a violent nationwide strike in Cambodia’s garment industry, factories have resumed production.  Marking history as one of Cambodia’s largest strikes in recent years, the strike has brought much attention to garment factory workers.  Many U.S. importers have be affected through lost orders and missed shipments due to factory shutdown.  However, most factories have re-opened, although only about 50-60% of the workers have returned back to work.

The strike started as a protest against the government’s offer in December to raise the industry minimum wage to up 19% to $95 per month.  Workers are requesting $160 per month.  According to The Asia Floor Wage Alliance, the average living wage should be about $283 per month. 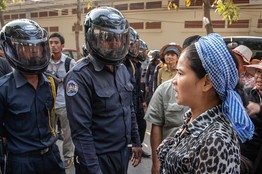 To read more on the strike, please click here.