Congestion, Labor Tensions and Tax concerns at U.S. Ports Have Spurred Some Shippers to Look North

The Canadian government has spent roughly $1.22 billion over the past decade to improve rail and road access and boost inspection capacity at its West Coast ports, like the port of Vancouver. BLOOMBERG NEWS

Prince Rupert, British Columbia, is a 1,000-mile drive from Seattle and far from major manufacturing centers. But last year, the port in the northwestern Canadian province was a key North American entry point for Asian-made products, and nearly all of the goods it received went to the U.S.

Cargo traffic bound for the U.S. has risen 11% so far this year at Prince Rupert, the smaller of Canada’s two West Coast ports. To take advantage of growing demand, the port is moving ahead with plans to boost its container-handling capacity.

Shipping companies are seeking the fastest route to move Asian goods to the U.S. Midwest, with a growing share of U.S.-bound cargo arriving first in Canada. The increased business suggests Canada’s efforts to exploit some natural geographic advantages by spending billions of dollars on its West Coast trade infrastructure are paying off.

Canada’s efforts underscore how some countries can take advantage of pressures in the global supply chain to create key trade logistics hubs, and reap the economic benefits.

Canada was the entry point for 2.6% of U.S.-bound Asian cargo in 2010, and has likely grown to a “new record high” since then, said Richard Lidinsky Jr. , commissioner for the Federal Maritime Commission, the agency tasked with regulating the U.S.’s international ocean transportation system. Roughly 87% of the containers received in Prince Rupert were hauled by rail to the U.S., the agency said.

Northwest U.S. ports have seen a nearly 11% drop in cargo from Asia over the past year, according to the FMC.

“It’s a wake-up call for us,” said Mr. Lidinsky. “It almost becomes a self-fulfilling prophecy. If you have problems in California and the Pacific Northwest, there’s a natural alternative to go to Canada.” Once a port loses that business, he added, “it’s very, very difficult to win it back.” 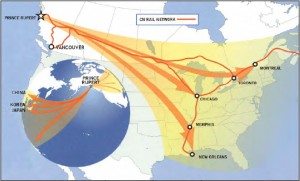 Canada’s two big Pacific ports have a natural geographic advantage: relative proximity. Prince Rupert, for instance, is the closest North American port to Asia due to the curvature of the Earth, and is more than 68 hours closer to Shanghai by boat than Los Angeles, according to its port authority. It also boasts one of the world’s deepest natural ice-free harbors.

Building on that advantage, Canada’s government has spent 1.4 billion Canadian dollars (US$1.22 billion) over the past decade to improve rail and road access and boost inspection capacity at West Coast ports. An additional C$2.1 billion in funding has come from provincial and private-sector sources to create a “gateway” to the Asia-Pacific corridor.

Total volume at British Columbia’s ports has jumped 46% since 2006, helped by the 2007 construction of the Prince Rupert container port, outpacing North American West Coast traffic growth of 3.8%, according to the American Association of Port Authorities.

Both Canadian ports are viewed as reliable alternative ports that could see further boost in container volumes when shipping contracts are settled early next year, but neither port can completely handle the amount of volumes that U.S. shippers would prefer to transport through Canada, Mr. Hill said.

‘We started to see delays quickly when everyone started to divert.’ —Adam Hill, of logistics provider Scarbrough International

In one example of that surge in demand, a container terminal operator at Port Metro Vancouver in August told its customers it didn’t have enough railcars to ship Asian goods to the U.S. Midwest and suspended service for a week. “With the terminal currently operating over its designed operating capacity, we are left with this hard decision to make,” DP World Vancouver told its customers in an email at the time.

Another obstacle is the federal harbor-maintenance tax. Removing the tax – which shippers say costs anywhere from $25-$500 per container- would likely allow U.S. ports to win back as much as half of the business now going to Canada, the FMC said.

“The U.S., in some ways, has taxed themselves out of competition,” said Greg Timm, president of Pacific Custom Brokers Ltd., a Vancouver-based customs brokerage firm, just as Canada has made major investments in port infrastructure.

Some shippers said coming changes to U.S. and Canadian customs inspections, such as streamlining border inspections, will make it even easier for U.S.-bound goods to enter Canada, further expanding Canadian port business.

Trade into Washington from Canada grew by 6.4% last year, the biggest annual increase for any U.S. state, to $23.5 billion, according to the Transportation Department. “We’re not trying to actively market ourselves to customers, but it’s something that is organically happening,” said Robin Silvester, chief executive of Port Metro Vancouver.