Carriers turning down loads due to driver shortage

Truckload carriers in North America are turning down thousands of loads each day because they can’t recruit enough drivers, with turned away truckload shipments usually getting broken into smaller LTL loads.

The driver shortage continues to vex the North American domestic trucking industry, according to a number of speakers at the Stifel Transportation and Logistics Conference this week in Miami.

“The good news is we hired 500 drivers in 2014,” said Joe Cowan, president and chief executive officer of Cowan Systems, a privately held regional truckload carrier on the East Coast. “The bad news is we lost 500 drivers. So I spent $1 million (in advertising and social media efforts) to sustain the same number of drivers.”

Cowan said he always imagined mid-size and larger carriers would eventually solve their driver shortage issue by drawing from the ranks of smaller carriers that weren’t able to survive. But lower fuel prices changed that equation.

“Smaller companies can sustain themselves now, and that will hurt us all because we’re all fighting for the same drivers,” he said.

Indeed, much of the talk at the conference centered on how currently depressed fuel prices and a lack of drivers would affect the financials of public and private truckload and less-than-truckload carriers.

“There’s no real driver shortage at all,” said Lee Clair, partner at Zubrod/Clair & Co., a transportation and logistics advisory firm. 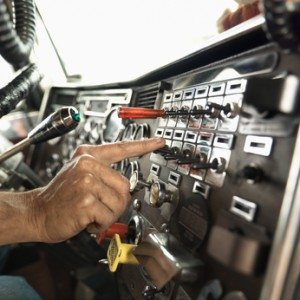 Clair said the issue is purely one of supply and demand. If supply chains paid trucking companies more for their services, drivers would get a higher wage and more people would be drawn to the industry. One carrier said the driver shortage could end up putting upward pressure on rates, which would allow carriers to pass on more in wages to drivers.

In the meantime, the trucking industry looks a lot like Hollywood, Clair said.

“There are no waiters and waitresses in Hollywood,” he said. “They’re all struggling actors and actresses, and waiting tables is something you do while you’re waiting to do something else. It’s the same in the trucking industry. People are doing this while they wait to become electricians.”

A major truckload carrier at the conference said it is turning down “several hundred loads per day” because of the driver shortage, despite spending a bundle on advertising. The carrier said the shortage will actually be felt more acutely when the weather “thaws out” and potential entrants into the trucking industry gravitate toward construction.

Billy Hupp, chief operating officer of the less-than-truckload carrier Estes Express Lines, said loads that are turned down by truckload carriers typically end up getting broken up into several smaller LTL loads.