The deal covers 22 areas including finance and online

South Korea and China signed a free trade deal on 1 June that will remove tariffs on more than 90% of goods over two decades. Trade ministers from the two countries met in Seoul to sign the pact between two of Asia’s biggest economies. The agreement between Asia’s largest and fourth-largest economies covers 22 areas including finance and online commerce but will not include rice and autos.

South Korean President Park Geun-Hye, in a letter to Chinese leader Xi Jinping, called the accord a “historic milestone” that would further cement relations.South Korea’s trade ministry said the deal would boost the country’s GDP by nearly 1 percentage point and create more than 50,000 jobs in the decade after its implementation. The agreement will give South Korea’s small- and medium-sized companies wider access to the Chinese market while boosting China’s investment in South Korea, the ministry said.

It was the first time for China to include finance, telecommunications and e-commerce industries in a free trade deal, according to South Korea. South Korea’s rice industry is not part of the pact but trade in 70% of agricultural goods will be liberalised.

China is the South’s top trading partner as well as the biggest export market, and two-way trade stood at around $235.3 billion in 2014, according to state data in Seoul. South Korea is also one of the biggest foreign investors in China, pumping in some $1.6 billion in the first quarter of this year.

The agreement will remove tariffs on 71% of South Korean exports to China in 10 years and 91% in 20 years. Seoul will in return remove tariffs on 79% of Chinese imports in 10 years and 92% in 20 years.Negotiations for the agreement, which began in May 2012, have often been marred by angry protests by South Korean farmers who feared an influx of cheap Chinese imports.

The final pact excluded many of South Korea’s major farming and fisheries goods like beef, pork, pepper and squid. By the same token, China excluded or delayed the opening of its relatively less-developed manufacturing segments such as the auto sector and display panel production. 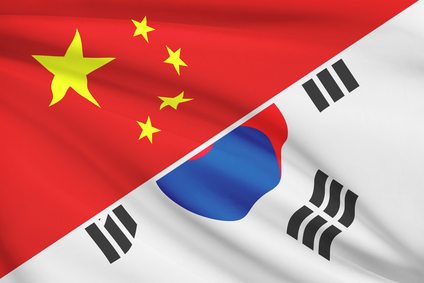