Several warnings preceded the deadly blasts at the Chinese port of Tianjin, including a state-backed research paper highlighting the risk of “grave accidents and casualties” in the chemicals sector and an explosion in another city blamed on lax safety controls.

Two huge explosions tore through a warehouse storing dangerous chemicals in the northeastern city on Aug. 12, killing at least 116 people and sending shockwaves through apartment blocks kilometers away.

A review by Reuters of documents and data, state media reports and interviews with foreign industry executives and consultants show that safety lapses in China’s chemical supply chain have long been a source of concern.

China has become the world’s largest producer and consumer of chemicals used in industries such as automotive, construction and textiles on the back of its decades-long economic boom. 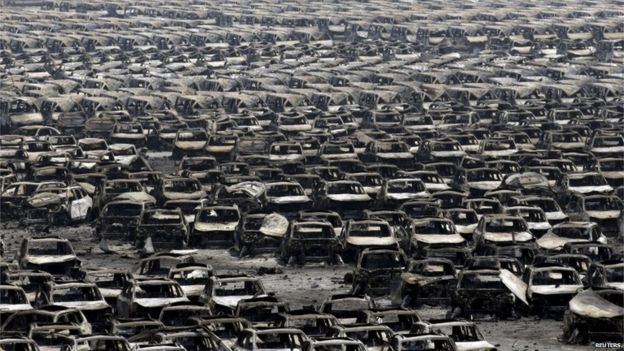 More than 4,000 people were killed in around 3,600 accidents involving hazardous chemicals in China between 2009 and 2014, according to Zhao Laijun, a professor at Shanghai Jiaotong University who has advised the Shanghai government on chemical facilities safety.

China’s State Council and State Administration of Work Safety did not respond to faxed requests for comment.

A peer-reviewed research paper published by two Chinese government scientists in July concluded that accidents in chemical industrial parks were a “significant issue”.

Weili Duan and Bin He, both members of the Chinese Academy of Sciences, also said that much of the existing emergency response procedures were “not systemic and complete”.

They highlighted poor information and organizational structure in the industry, slow response times and bad decision-making, and proposed a new emergency response system for accidents at China’s chemicals facilities.

“The management of chemical industrial parks is improving but that doesn’t rule out the possibility of accidents,” Duan told Reuters. “It’s still a problem. However it is also a difficult thing to fix as it is highly complex.”

Duan, who has shifted his research focus to natural disasters but studied chemical safety issues in China for years, said the country has gradually been enacting stronger regulations, but chemicals facilities have been slow to comply.

The other scientist, He, did not answer phone calls or respond to emailed requests for comment in English or Chinese. A colleague confirmed he was still at the institute.

As far back as 2009, Chemical Industry News, a local industry publication, reported that many of China’s chemical warehouses were old and likely to have safety problems, and many others were likely operating without licenses.

“Products made in China mostly compete on costs,” said Paul Pang, vice-president of IHS Chemical. “In some cases, safety and environment may be compromised if the cost pressures are too high.”

Safety conditions around chemical facilities were on the radar of Tianjin officials before last week’s blasts.

After a July explosion at a chemicals warehouse in the coastal city of Rizhao, in southeastern Shandong province, the Tianjin government called a meeting with more than 20 companies dealing in dangerous goods and asked them to self-inspect their facilities, according to an Aug. 6 notice posted on the Tianjin Administration of Work Safety website.

It was not clear whether they included the owners of the site where the blasts took place or if any action was taken as a result. The Tianjin city government and Tianjin Administration of Work Safety did not respond to faxed requests for comment.

No-one was killed in the Rizhao blast, which the official China News Service blamed on a “serious violation of regulations, management disorder and lack of safety awareness”. The explosions at Tianjin, the world’s 10th-largest port, were big enough to be seen by satellites and register on earthquake sensors.

Authorities there were slow to release a list of the chemicals being stored, which included 1,300 tonnes of potentially explosive oxidizing chemicals, including ammonium nitrate and potassium nitrate, 500 tonnes of flammables, including sodium and magnesium, and 700 tonnes of deadly poisons, mainly sodium cyanide.

Firefighters initially fought the blaze with water, which experts said may have combined with the chemicals to form an explosive gas.

Concerns about China’s chemical supply chain have also been flagged by industry consultants and international organizations, who say China has regulations but they are not enforced.

Last year, supply chain consultant Sedex said in a report that inadequate chemical storage facilities, labeling, training and emergency procedures were the No. 1 risk in China. In 2013, the United Nations Environment Programme warned that China’s chemical and industrial parks had weak safety provisions.

Underlining the serious problems that remain, state media reported on Friday that inspections ordered since the Tianjin blasts had found safety hazards at almost 70 percent of firms handling dangerous chemicals in Beijing.

In Tianjin, officials have warned that cyanide levels in the waters around the port site have risen to as much as 277 times acceptable levels.

“I understood there was risk, but I didn’t think it would be this bad,” said a man surnamed Zhang, who owned an apartment about 600 meters from the warehouse that exploded. No one in his family was hurt but his apartment was destroyed. “My child is only 6-years-old, so of course I am worried.”.