First Ship to Transit Through the Expanded Panama Canal 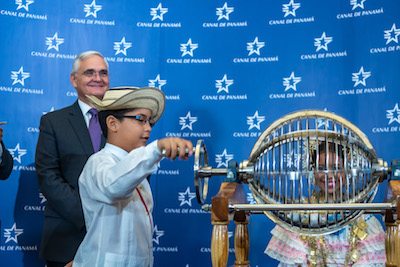 China COSCO Shipping has won the draw for the first transit through the Expanded Panama Canal during the waterway’s inauguration on Sunday, June 26. The shipping line’s container vessel Andronikos will be making the inaugural transit. The vessel, which has a maximum capacity of 9,400 TEUs, is 8.25 meters in beam and 299.98 meters in length.

In addition, more than 100 Neopanamax ships have already made reservations for commercial transit through the new locks, which will begin on June 27, 2016, following the historic inauguration.

The draw took place this morning at the Panama Canal Administration Building, in which a Notary Public served as witness, among invited attendees. The Norwegian/Swedish shipping line Wallenius Wilhemsen Lines (WWL) and the Chinese shipping line China COSCO Shipping participated in the draw.

WWL participated with the car carrier Thalatta. The car carrier, which has a maximum capacity of 8,000 CEUs (car equivalent units), is 36.5 meters in beam and 199.97 meters in length.

“It is a great honor to have one of our top customers celebrate this historical moment with us,” said Panama Canal Administrator, Jorge L. Quijano. “We are excited and prepared to continue providing the same reliable and efficient service within the Expanded Panama Canal that our customers have come to expect through the years.” 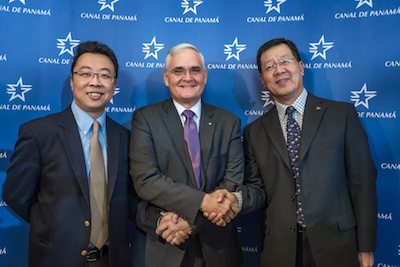 The draw was carried out with ballots labeled with the name of each participant. The first ballot was chosen and given to the Notary Public, who opened and handed it to the Administrator, who announced the winner of the draw.

Directly following the announcement, a second ballot was chosen for the shipping line-in this case WWL-that will deploy a vessel for the inaugural transit in the event that the winner informs the Panama Canal by May 10 that it will not be able to deploy an approved vessel.

The winner will incur in all costs associated with the transit, including booking fees and other marine services, which will be charged in accordance with Panama Canal published tariffs.

The Panama Canal invited its top customers to participate in the draw. Of the invited customers, those interested in participating were required to indicate the Neopanamax vessel’s name, type and dimensions that it planned to deploy on the inauguration day of the Expanded Canal.

The Executive Vice Presidency for Operations verified that each submission complied with the Panama Canal’s requirements. The proposed vessels were required to not surpass a maximum beam of 49 meters and a maximum overall length of 366 meters. In addition, the maximum draft or point of immersion for the inaugural transit is 12.5 meters.In addition, on April 18, 2016, the Panama Canal began accepting transit bookings for Neopanamax vessels for commercial transits through the Expanded Canal, which will begin on June 27, 2016. The Canal will offer four additional slots per day for Neopanamax vessels, in addition to the existing 25 slots for the existing Canal.

The first commercial transit reservation was granted to a liquefied petroleum gas (LPG) tanker LINDEN PRIDE of Nippon Yusen Kaisha (NYK Line), represented by shipping agent Norton Lilly International (Panama), S.A. The vessel has a length of 754.59 feet and a beam of 120.08 feet. 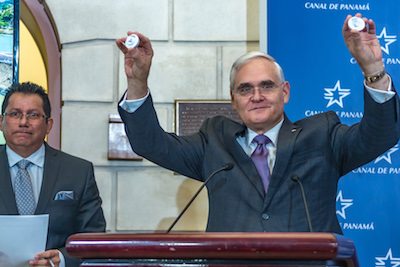 Scarbrough International will be reporting LIVE from Panama during the inauguration in June!