China and the United States

United States and China’s relationship is an important one, and one that could go both ways.  Both countries contain large consumer markets and hold the power to influence the world’s economics. 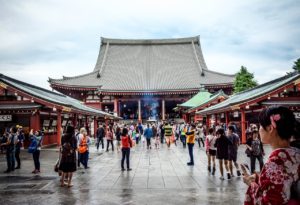 China provides cheap human labor to its manufacturing sector and its products are sold in the global market at extremely competitive prices. The American market is one of the biggest consumer markets of Chinese goods. In 2015 alone, United States imported $483 billion worth of goods, mostly electronics and clothing, from China. Trade relations between China and United States have always depicted a state of friction and cooperation simultaneously. The real shocker for the United States’ government came in 2010 when China’s GDP surpassed Japan’s and it emerged as the largest growing economy in Asia, and the second largest economy in the world. 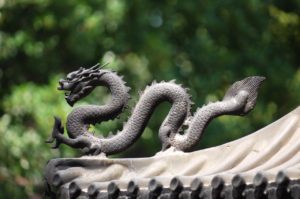 China has become the most important economy in the world based on manufacturing and growing consumption. A new white paper from American Shipper and Amber Road states there are four key elements of China’s position on trade:  1.) expanding ties with the EU,  2.) its growing consumption market, 3.) the world’s manufacturing hub, 4.) possible rocky future with the U.S.

The fact that the majority of the world’s items are “made in China” is not going to change.  On the other hand, China, the largest exporter in the world, also has a massive consumer market and is one we should definitely consider when marketing U.S. export sales.  According to American Shipper’s white paper, “while the U.S. has the world’s largest economy, China has the most important economy in terms of growth, now contributing 12 percent of global GDP.”  China’s decision to rescind the one-child policy will also play a huge impact in consumer spending in coming years.

China is already the third largest purchaser of U.S. goods (after Mexico and Canada), spending $165 billion on U.S.-made goods in 2015.

It is important to remember that our trade relationship with China can swing both ways.  As a buyer of Chinese goods, we are also a supplier. Companies should definitely look into expanding their sales and can obtain assistance through economic development programs and grants.  Contact us if you would like to be connected with someone today.  China’s trade relationship continues to grow with the European Union and the Belt & Road Initiative will only foster that relationship. 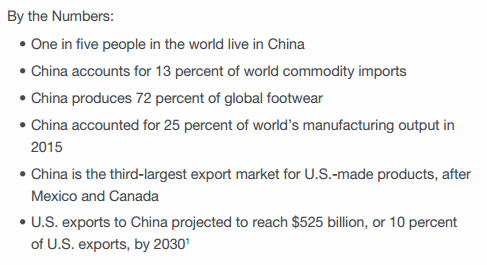 Courtesy of American Shipper & Amber Road. Click on the image and            download the White Paper for more details and information 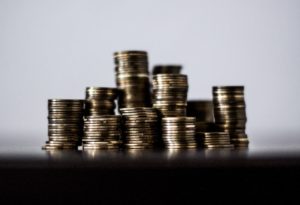 Economists believe that the ongoing hostile situation between two countries can result in a trade war. Since China and United States are not involved in any bilateral trade agreements, one possible course of action, which has been predicted, is that President Donald Trump might take China’s case to World Trade Organization (WTO). With some evidence and statistics backing up the claim, American government can prove that China is saturating American markets with cheap consumer goods.

China is able to achieve unbeatable competitive prices by providing large amount of subsidies to its industries, especially in the manufacturing sector. The previous American government had already launched various legal cases against China in the courts of WTO. If Trump’s government decides to follow the same route, there is a high probability of China retaliating in the same way. Perhaps China might find issues with American food exports based on health and safety concerns, for example.

Both the countries realize the fact that a trade-war between China and US will be detrimental to their economies. Therefore, in their first meeting in March, US President Donald Trump and Chinese President Xi Jinping have decided to finalize the trade negotiations within 100 days. In addition to that, to amend the relations with its largest trading partner, China has agreed to grant United States a better access to its financial markets and reduce the tariffs on US beef imports.

China was already negotiating this deal during the Obama administration but then it was put on hold because of the transition in the US government. The new administration under Trump has yet to decide if they are going to accept the treaty or not.

However, if United States accepts the treaty, the trade relations between the two major trading partners will improve even further. The decision will also be welcomed by the businesses operating in financial sector and beef industry.