Chinese Company May Build $1B Container Terminal in Sydney Harbour

Chinese Company May Build $1B Container Terminal in Sydney Harbour

SYDNEY — A large Chinese construction company has agreed to build a highly automated container terminal in Sydney Harbour, depending on the results of a feasibility study to be conducted next year, says the CEO of Harbor-Port Development Partners.

If it proceeds, the project is expected to cost more than $1 billion and take several years to complete, with operation possibly to start sometime in 2019, Albert Barbusci said.

China Communications Construction Co. Ltd. has agreed to design and build a container terminal and all related infrastructure around the municipality’s greenfield site in Sydney Harbour, Barbusci said in a telephone interview from Montreal.

Infrastructure could include the rail line, roads and possible business operations that support a container terminal, he said.

Work on a feasibility and design study has already begun and will continue with a site visit by Chinese officials early in the new year, said Barbusci.

That work will determine whether the project gets built.

“It’s not a done deal until it’s a done deal … but they’ve already begun the work and they’ve studied the harbour, and it’s just a great day for us today to have the largest port construction company in the world agree to partner with us,” Barbusci said.

Even though the container terminal would be highly automated, it would still employ 400 or more people, not including warehouse and transportation jobs to support the operation, he said.

Cape Breton Regional Municipality Mayor Cecil Clarke said the deal was signed last week in China, and it represents the next step toward securing a container terminal.

“It’s a very large step forward with the development of the Port of Sydney as a global hub for containerized traffic with the new era of ultra-large container ships.” 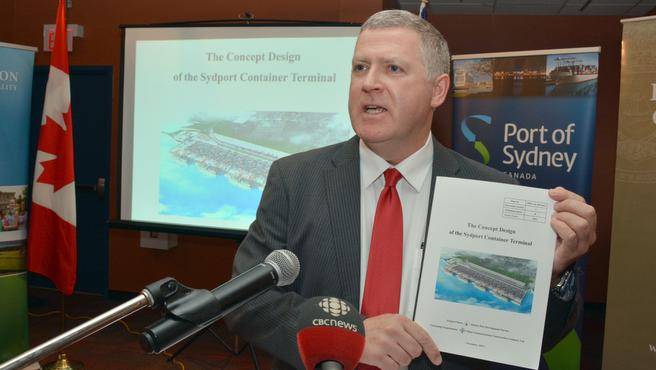 China Communications Construction has built ports and related infrastructure around the world but does not have any operations on the East Coast of North America, said Clarke, and the company sees Sydney Harbour as an opportunity to get a foothold on the eastern seaboard, where it can transship goods being sent through the Suez Canal.

It’s also a unique opportunity for the Chinese company to have an ownership stake in a North American operation, he said.

Funding for the billion-dollar development has been identified, said Clarke, but a terminal operator and shipping lines still have to come on board.

“The Port of Sydney will not move forward unless we have all aspects of the supply and operating chain in place,” he said.

“Until that’s in place, we will not be moving forward with port development, but the investments to date show the confidence in the model for the Port of Sydney.”

Clarke said the municipality’s intention is to lease the greenfield site and related lands around it, but council may also consider selling the land to a container terminal operator.

Under provincial rules, the municipality can only sell land or lease in 20-year blocks, but the industry requires a 99-year lease, said Clarke.

If the municipality can get a charter similar to the one granted to Halifax Regional Municipality, he said, the long-term lease becomes an option.

And a lease would be the preferred option, said Clarke.

“We hope that we will have something in place that could be presented to the province and brought to the legislature for the spring of 2016.”

Harbor-Port Development, a private firm awarded the exclusive right to market the Port of Sydney, has spent more than $2 million of its own money to date on efforts to attract a consortium that will build and operate a container terminal in Sydney, Barbusci said.

In exchange, the local company will negotiate an equity stake in the development, but the details of that haven’t been worked out yet, he said.

Meanwhile, efforts to attract a terminal operator will continue, Barbusci said, because the Chinese company designs and builds container ports and manufactures container cranes but isn’t an operator.

“Given its strategic location, CCCC views Sydney’s deepwater harbour as a potential game changer for the North American eastern seaboard,” he said.

“As a partner, CCCC brings global experience, state-of-the-art technology and financial strength to this project. We expect to have our first working visit to Sydney early in the new year.”