Chinese New Year: What’s it all about?

Chinese New Year: What’s it all about?

Also called the Lunar New Year, or the Spring Festival, the holiday is steeped in layers of myths and traditions. The festivities last for 15 days. It is a time for families with Asian heritage to come together to eat good food and participate in cultural traditions. Here’s what you need to know about this celebration.

1. The traditional Chinese calendar is lunisolar, which means it charts time based on the movements of both the moon and the sun.

The exact date for Chinese New Year will vary on the Gregorian calendar, generally falling between Jan. 21 and Feb. 20. The festival reportedly traces its origins to the Shang Dynasty (between 1600 BC and 1100 BC), when people offered sacrifices to gods and ancestors to mark the end of an old year and the beginning of a new year. A legendary wild beast named Nien (or “year”) was thought to attack people at the end of the old year. Villagers would use loud noises and bright lights to scare the creature away, a practice that slowly morphed into the Chinese New Year festivities. 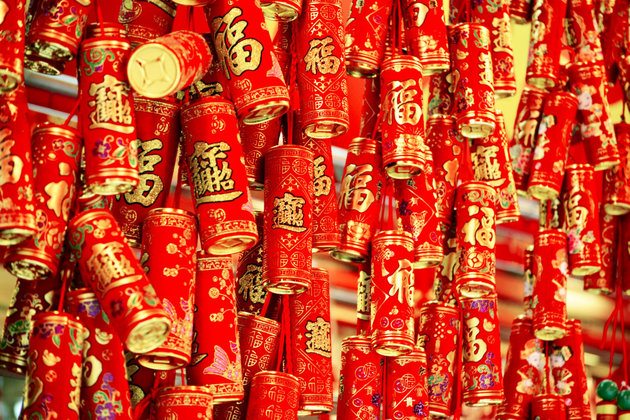 Each year is associated with an animal: rat, ox, tiger, rabbit, dragon, snake, horse, sheep, monkey, rooster, dog and pig. People are said to be influenced by the personality of the animal that rules their birth year. There are a number of legends that tell the story of how the years were ordered. In one legend, Buddha called all the animals of the world to him before he left the earth. The only ones that listened were these 12 animals, so Buddha named a year after each of them in the order that they arrived.

Another legend has the animals racing to see the Jade Emperor, which some Chinese traditions consider to be the ruler of Heaven. An old ox was in the lead, but he was a kind animal and when he saw a rat trying to cross a river, he stopped to help. But the rat was cunning — just when they were about to climb onto the shore, the rat jumped off the ox and ran to the finish line, becoming the first animal in the cycle.

3. This is the Year of the Monkey, the ninth animal in the cycle.

The monkey features prominently in many ancient Chinese legends. People born in the Year of the Monkey are said to be intelligent, clever, and gregarious, but also mischievous. They are skilled and smart, but shortcomings, like a quick temper and a touch of arrogance, tend to hold them back.

4. It’s a culture tradition to build up good luck during this week.

Some families avoid doing certain things to make sure that they don’t unwittingly set a precedent for the entire year. For example, people won’t wear old, damaged clothing, so as not to carry bad luck into the new year. Some families try not to wash laundry, handle knives, or take out the garbage on this day to make sure they don’t throw their good fortune away. Others believe it’s mandatory to stay up late to welcome the new year.

5. It’s customary families to travel “home” to visit over this holiday.

This tradition leads to a massive travel season in China. In 2016, travelers wereexpected to make 2.9 billion trips between Jan. 21 and March 3, with the majority of those trips happening around Lunar New Year. The Chinese government has instituted a weeklong public holiday to celebrate the new year, giving people the chance to return to their hometowns or take vacations abroad.

6. The 15 days of New Year celebrations are filled with cultural activities.

The most important meal is the one that falls on New Year’s Eve. Families will eat traditional foods on that day, such as rice cakes, tangerines, fish, long noodles, and dumplings. Parents give their unmarried children red envelopes filled with money, called hong bao, during the holiday. The color red is a symbol of good luck in Chinese culture. People will decorate their homes with lanterns and paper scrolls. Some communities organize cultural celebrations, which include dragon dances, parades and firecrackers.

7. The celebrations end with the Festival of Lanterns.

Some believe that this is the birthday of Tianguan, the Taoist god of good fortune. Others say that the lanterns are related to a legend about the Jade Emperor, who became incensed after humans hunted and killed his favorite crane. He planned to send a firestorm to destroy the village that was responsible. One man suggested that villagers hang red lanterns outside their houses, which helped trick the Jade Emperor into thinking that the village was already on fire.

What Chinese zodiac year were you born in? Look at the chart below to figure it out.