The Obama administration and key congressional leaders have signaled recently that they largely share the same objectives for advancing U.S. trade policy in 2015. Trade has been named as one of the issues on which the Democratic White House and Republican-controlled Congress may find common ground, and early indications are that both sides are pushing to take advantage of this confluence of interests by accomplishing as much as possible.

TPA would require Congress to approve or reject trade agreements negotiated by the White House within a set period of time and is seen by many as a necessary precursor to finalizing the TPP as well the Transatlantic Trade and Investment Partnership with the European Union. However, Froman rejected arguments that TPA strips Congress of its constitutional authority to regulate foreign commerce and allows the White House to rush through agreements negotiated in secret.

“TPA puts Congress in the driver’s seat to define our negotiating objectives,” he said, including on issues that have arisen since the last grant of TPA more than a decade ago such as the increasing role of the digital economy and state-owned enterprises. TPA also “strengthens Congressional oversight by requiring consultations and transparency throughout the negotiating process” and “establishes the timeline and process for the trade agreements that we bring home to be reviewed, not only by Congress but also by the American people.”

House Ways and Means Chairman Paul Ryan, R-Wis., agreed. TPA “would maximize Congress’s power,” Ryan said, by specifying “all our negotiating objectives for our trade deals,” requiring the administration to consult with Congress, opening agreement texts and negotiating rounds to lawmakers, and giving Congress “the final say” by mandating legislative approval of any change in U.S. law required by a trade agreement and allowing Congress to say “no deal” if the administration “doesn’t cooperate” on any of the TPA requirements. 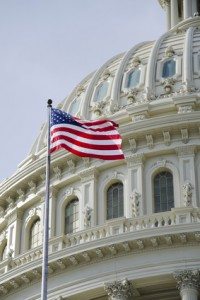 Senate Finance Chairman Orrin Hatch, R-Utah, told the American Enterprise Institute on Jan. 30 that he, Ryan and Sen. Ron Wyden, D-Ore., are working to craft a TPA bill, which could be introduced by the end of February and considered on the Senate floor in March. Hatch said he believes the TPA legislation he introduced in 2014 “represents the best starting point for our efforts in this Congress” and that the bill now under development will only reflect “some changes” from that bill. He indicated that three of the most important functions of TPA will be to ensure that future trade agreements strengthen standards for intellectual property protection and enforcement, incorporate the “basic, fundamental protections that underpin U.S. commercial law” with respect to investment and back them up with “strong investor-state dispute settlement mechanisms,” and yield a significant reduction and ultimately the elimination of foreign tariffs on U.S. goods, services and agricultural products.

On TPP, Froman told lawmakers that “the contours of a final agreement are coming into focus.” There has been increasing speculation that talks could wrap up within the next several months, particularly with the U.S. and Japan seemingly accelerating recent efforts to reach a bilateral deal. On the other hand, an effort to add more than 200 tariff lines to the ITA, which currently provides for duty-free trade of about 180 high-tech goods among 75 signatory countries, is currently stalled over China’s resistance to a request by Korea and Taiwan to add liquid crystal displays used in televisions and computer monitors to the scope of the agreement.

Froman said that also in 2015 USTR will seek to advance negotiations on TTIP, the Trade in Services Agreement and the Environmental Goods Agreement. The eighth round of TTIP talks is taking place this week, part of an effort to give the initiative a “fresh start” following the installation of a new European Commission last fall, but officials have recently indicated that substantive discussions will likely be put off to the second half of the year as the U.S. focuses on TPP. Both sides have previously expressed interest in concluding the TTIP as quickly as possible, but the challenging nature of many of the issues to be negotiated as well as competing economic and political priorities may make that difficult. The TiSA negotiations have been underway for about two years and currently have about two dozen participants, but it is unclear what amount of progress may be achievable in 2015. The EGA talks were launched in July 2014 by 14 countries and seek to build on commitments by members of the Asia-Pacific Economic Cooperation forum to reduce tariffs on a list of 54 environmental goods to five percent or less by the end of 2015.

The administration will pursue a number of other initiatives as well, Froman added, including expanding U.S. exports of goods and services to its free trade agreement partners and ensuring that trade partners follow WTO and FTA rules. Froman also identified China, India, Burma, Taiwan, Brazil and the countries of sub-Saharan Africa as “key trade and investment relationships” that USTR will seek to strengthen.

On the legislative side, Ryan and Hatch emphasized the need to reauthorize the Generalized System of Preferences and the African Growth and Opportunity Act. Supporters say the July 2013 expiration of GSP has cost importers of thousands of goods from more than 100 beneficiary developing countries more than $1 billion in tariffs. One potential hurdle to GSP reauthorization was removed last year when President Obama terminated the eligibility of Russia, which has fallen into disfavor in Washington due to its involvement in neighboring Ukraine. AGOA is scheduled to expire this fall but is generally expected to be extended before then, though there may also be reforms aimed at ensuring that more countries can take advantage of its benefits. There has been some speculation that GSP and AGOA renewal, and possibly some other trade issues as well, could be added to the TPA bill expected to move through Congress this spring.

The two committee leaders also highlighted the miscellaneous trade bill, which Ryan said would eliminate duties on “hundreds of products that we don’t even make in our country—and that our manufacturers need to build their own products.” The MTB has been held up by concerns that it is effectively an earmark, a form of government spending that benefits only a few and is thus increasingly untenable in the current fiscal environment. A bipartisan bill that would reform the MTB process to address these concerns (S. 260) was recently introduced in the Senate.

Ryan and Hatch also noted their interest in passing legislation to streamline customs procedures, enforce trade laws, and address the evasion of trade remedies such as antidumping and countervailing duties.