Additional Tariffs on Steel and Aluminum made outside of USA

According to Wall Street Journal, “President Donald Trump on Monday increased pressure on two top U.S. trading partners, saying he would lift planned tariffs on steel imports only if Mexico and Canada sign a new version of the North American Free Trade Agreement, or Nafta.

We have large trade deficits with Mexico and Canada. NAFTA, which is under renegotiation right now, has been a bad deal for U.S.A. Massive relocation of companies & jobs. Tariffs on Steel and Aluminum will only come off if new & fair NAFTA agreement is signed. Also, Canada must..

What exactly will be taxed?

At this point, no one knows exactly what commodities will be taxed.  Is the tax intended for raw materials, products that are made of steel and aluminum, or a combination of both?  The answer is said to be revealed this week.  Basically the Commerce Department states that if the products are not already being produced in the United States, they will not be effected.  For all other products that are produced in countries other than the U.S., the exact duty amount and commodity will be announced next week.

In fact, after completing its investigation, The Department of Commerce brought their Section 232 report to the President in January 2018, which revealed effects of steel imports on U.S. national security.  According to American Shipper,

“The Department of Commerce completed an investigation into the effect of steel imports on U.S. national security and submitted the results to President Trump for review, giving him 90 days to take action based on the findings.  The results of the investigation, conducted under section 232 of the Trade Expansion Act of 1962, were not yet made public.”

The results submitted by The U.S. Department of Commerce encompassed three trade remedy options.   “For both steel and aluminum imports, the reports recommended assessing blanket tariffs, broad import quotas, or tariffs targeting specific countries.” [American Shipper]  Basically The Commerce Department is making a case that the dumping of cheap steel and aluminum from China and other countries puts U.S. competitors out of business, risking national security.

Foreign companies that price their products in the U.S. market below the cost of production or below prices in their home markets are subject to “anti-dumping duties.” Companies that receive unfair subsidies from their governments, such as grants, loans, equity infusions, tax breaks and production inputs, are subject to “countervailing duties” aimed at directly countering those subsidies.  The Department of Commerce gave recommendations and findings as pictured below.

Note that the recommendation is to place the tariff in addition to any duties already in place. 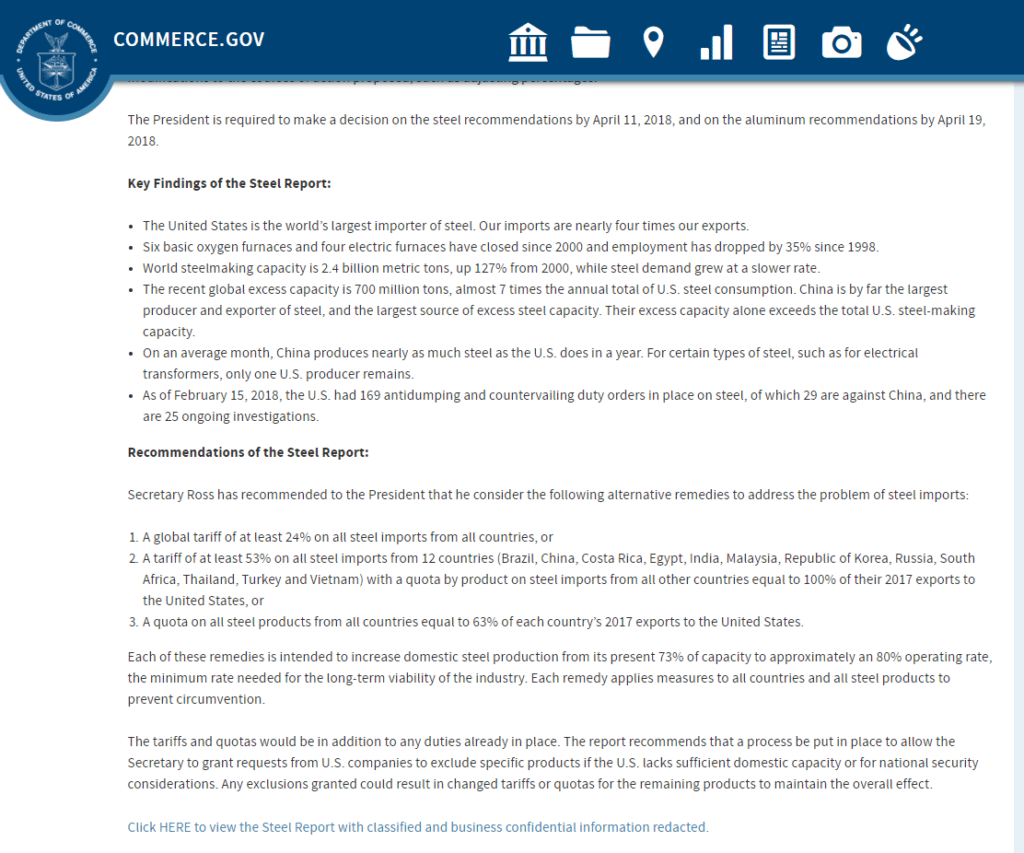 Click on the snippet below to watch the full video from CNN. 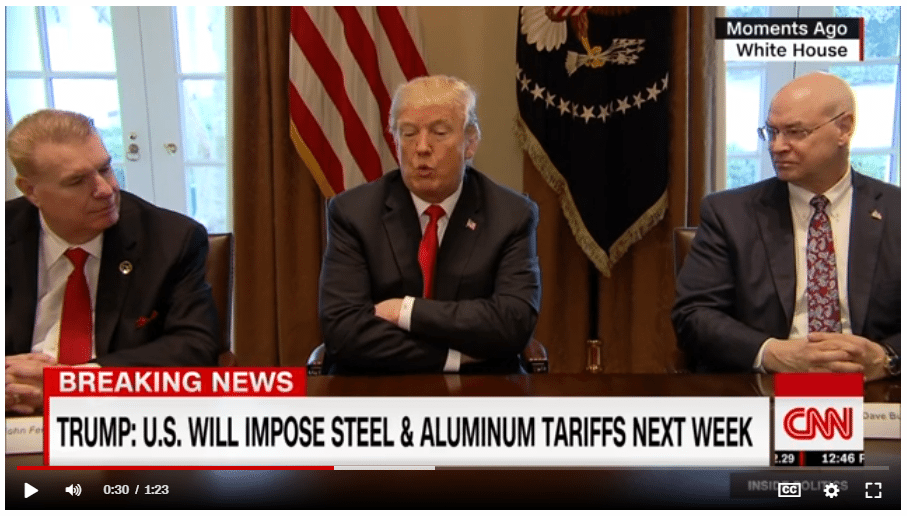 What other Countries Have to Say

European Union President, Jean-Claude Juncker responds, “The EU has been a close security ally of the U.S. for decades. We will not sit idly while our industry is hit with unfair measures that put thousands of European jobs at risk.” Canada’s response is pretty much the same. EU and Chinese officials are looking to retaliate if this is kept up.  According to CNBC, “European Union and Chinese officials are considering taking aim at politically strategic products made in the U.S., such as bourbon and motorcycles.” “Agriculture products such as cheese, orange juice, tomatoes and potatoes are also targets for retaliation.”

While tariffs could boost the domestic steel and aluminum industries, others say the broad impacts could weaken the broader economy.

“The biggest sectors of steel consumption are in the construction industry, the auto industry, oil and gas industry, all of which need these products to produce competitive products,” warns Yerxa.