Drayage drivers for Pacific 9 Transportation began strikes this summer complaining they have been misclassified as independent contractors.  They are fighting to become actual employees of one of four teamster companies:  Eco Flow Transportation, Shippers Transport Express, Toll Group and Horizon Lines. [Teamster.org]

There might be major upcoming changes in drivers’ compensation for those picking up and delivering containerized truckloads at LA and Long Beach Ports. 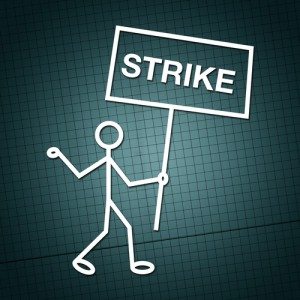 According to an article in American Journal of Transportation, “Carlos Quintero, 33, was a driver for Pacific 9 Transportation. He has been out of work for a year after injuries suffered from a trucking accident. He would like the company to recognize that he and fellow drivers are employees and not independent contractors and he would like to go back to work for Pacific 9.

He told AJOT that the company promised to reclassify drivers as employees a year ago but still has not done so, even after a finding by the National Labor Relations Board that the drivers are not contractors but employees.”

The life of a harbor truck driver is a tough one, he told AJOT,

“The company makes you pay for everything when you are a contractor. So on Monday, what you make goes to make payments on the truck. On Tuesday, it’s the fuel and then it’s the insurance. And before you know it, it’s Friday before what you make actually goes to you. And that’s what we live on. But sometimes, that doesn’t happen. For example, with the congestion at the (LA/Long Beach) terminals, sometimes they don’t let you deliver your containers because they don’t have the room. And so, you don’t get paid until the container is delivered. So lots of times, we have to go back to the company parking lot and go sleep in the truck waiting until we can come back and deliver the container. Meanwhile, we’re not making any money. And what’s worse, the company makes us pay for being parked in their own parking lot. A year ago, I was in an accident. Because the company says that I am not an employee, I can’t get workers compensation.”

These drivers escalated protests Tuesday, September 22, 2015 by performing “ambulatory picketing” at marine terminals in the ports of Los Angeles and Long Beach, while continuing to picket the company’s headquarters in Carson.

Meanwhile, workers at a California Cartage warehouse at the Port of Los Angeles, also began a separate strike on Tuesday seeking to improve wages and working conditions.

According to Barbara Maynard, a spokeswoman at the Teamster affiliate Justice for Port Drivers, the Pac 9 drivers, who have been on strike since July 21, say 38 drivers are waiting for a ruling from the California Labor commissioner on wage and hour claims for more than $6 million they claim they are owed.