OTTAWA — The federal government is poised to get the Canadian Pacific Railway (TSX:CP) back on track.

A government source tells The Canadian Press that legislation will be tabled Monday to end the strike by 3,300 locomotive engineers and other CP train workers.

A notice to allow the bill to be introduced was placed on the Commons order paper late Friday afternoon. 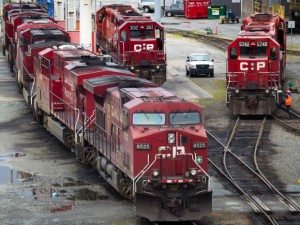 The Harper government has never been shy about using a legislative hammer to stop or prevent strikes that it feels could pose a threat to the economy.

Canadian Pacific Railway began operating a reduced freight schedule run by its managers on Sunday, after talks on a new contract broke down and more than 3,000 train engineers and conductors walked off the job.

Canada’s No. 2 railway and the Teamsters Canada Rail Conference failed to agree on terms including on scheduling and rest time. The railway reached a deal with a second union, Unifor, which represents safety and maintenance workers.

The strike will affect automakers, crude-by-rail and grain shipments and port operators as goods face delays. Commuters in Montreal will also feel the effects as CP operates some commuter trains in Canada’s second largest city. CP workers in the United States, where the railway has a substantial network, are not on strike.

Canada’s Labor Minister Kellie Leitch, who intervened in the talks on Friday to try to stave off the strike, said she was “incredibly disappointed” that the union failed to reach an agreement with the Calgary-based company, adding “the union continually stifled progress.”

“Our government will review all available options to end any work-stoppage expediently, up to and including the introduction of legislation in Parliament,” Leitch said in a statement.

On her Twitter feed, Leitch said the strike would cost the Canadian economy about $205 million a week, tweeting: “Our government will take swift action to protect our economy.”

In recent years, the government has intervened, or threatened to, in several major transportation-related labor disputes including at CP, where it introduced legislation that ended a nine-day strike in 2012.

Back-to-work legislation, if passed, could force the employees back to work in days.
The union, which said it remains willing to negotiate an acceptable settlement, had called CP’s position “severe.”

U.S. railroad CSX Corp said the strike “could result in halted or delayed shipments to and from Canada” especially in Buffalo and Detroit where CSX interchanges with CP.

Jarrett Zielinski, president and CEO of Torq Energy Logistics Ltd, which operates crude-by-rail loading facilities in Western Canada, said he expected the federal government to step in and take action.

Torq’s main terminal in Unity, Saskatchewan, is connected to both CP and Canadian National Railway, Canada’s largest rail company, mitigating Torq’s exposure. CN reached a deal with the Teamsters on Saturday and is in talks with Unifor but does not face a strike deadline.

Asked earlier about a potential CP strike, oil traders in Calgary said it would only have a big impact on crude shipments if it dragged on for an extended period of time.

Loading facilities that are connected to both CP and CN rail will be less affected.

Crude-by-rail only makes up a small percentage of the more than 3 million barrels per day of crude that Canada exports to the United States every day but rail capacity has helped reduce price volatility by easing congestion on pipelines.

“Grain shippers on CP lines will have no options in their ability to supply international customers,” Sobkowich said.

The costs from delayed shipments, lost sales and vessel demurrage will affect all players in the grain transportation system, he said.

Canada is the world’s second largest wheat exporter and the biggest canola shipper.
With files from Reuters and Canadian Press