U.S. Trade Representative, Robert Lighthizer, has announced that the U.S. exemptions from the recently announced steel and aluminum tariff will include Europe, Australia, South Korea, Argentina, and Brazil in addition to Canada and Mexico (as long as they agree to an updated NAFTA). In fact, U.S. President Donald Trump has put new pressure on Nafta negotiations with an order saying he’ll impose steel and aluminum tariffs on Canada and Mexico on May 1 if he’s not satisfied with talks.  All listed countries will receive a 5-week waiver, except for South Korea who has already reached agreement on a revised KORUS, the bilateral agreement between South Korea and the U.S., stating that the U.S. won’t impose steel tax on imports from South Korea.

According to American Journal of Transportation, “An exclusion for those countries [mentioned above] beyond May 1 will depend on the status of discussions of satisfactory long-term alternative means to address the threatened impairment to U.S. national security.”  In addition, President Trump is allowing the U.S. allies to negotiate their own exemptions, which has pushed the European Union into trading talks even after its threat for retaliatory efforts, including large tariffs on items from the U.S. like Harley-Davidson Inc. motorcycles, Levi Strauss & Co. jeans and bourbon whiskey. Which countries will be included in the European Union? That is the question that is unclear and Trump says he will answer after March 21, 2018.   The European Union has demanded a permanent EU exclusion and continued to threaten retaliation taxes.

The tariffs went into effect on March 23, 2018. The countries that are still affected by the new policy include China, Russia, Taiwan, Japan, and India, among others.

According to Politico.com, “Lighthizer and Commerce Secretary Wilbur Ross have been taking the lead in the administration’s talks with various countries that are seeking exemptions from the steel and aluminum tariffs. The U.S. imports the majority of its steel from Canada, Brazil, South Korea and Mexico, but all told it imports steel and aluminum from roughly 50 countries.”

The tariffs imposed will be 25% on steel and 10% on aluminum.  These taxes are on raw materials only and they are in addition to the duty already in place.  Shippers across the United States are anxiously looking for the exclusions rules, but those exclusions from the new tax may not be granted for several months.  In fact, steel and aluminum users that depend on imported products not available from U.S. producers may have to wait up to 90 days for an exclusion.

Quartz Media LLC created a great image showing the steel suppliers to the United States. In fact, The Administration has exempted 53% of the suppliers of U.S. iron, steel and aluminum from the recent tariffs to go into effect March 23, 2018. 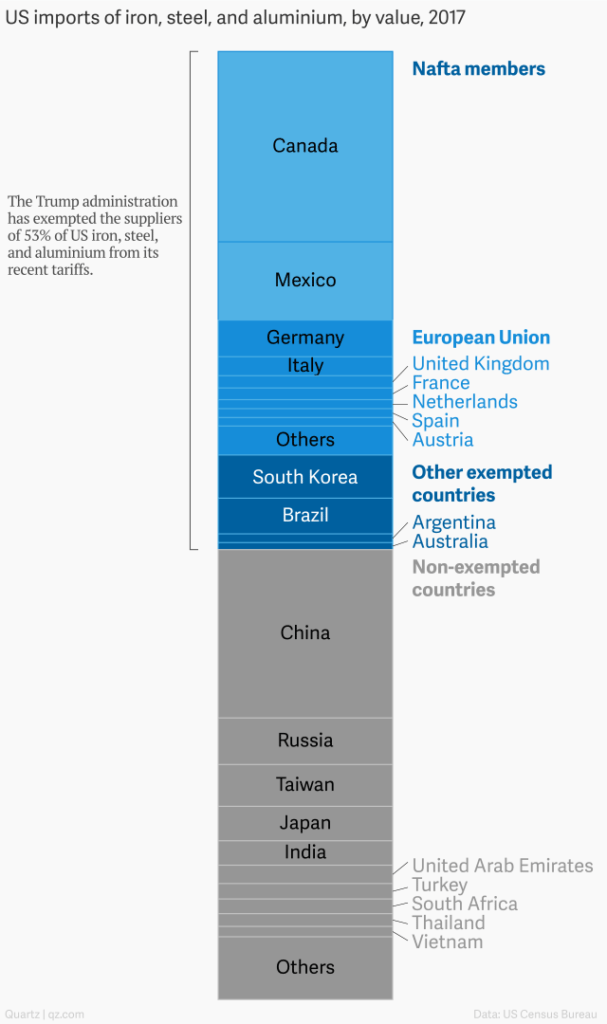 If your company is interested in learning more about exclusions, you can join a complimentary webinar put on by Dickinson Wright’s International Trade team  to review the Trump Administration’s Section 232 steel and aluminum tariffs and the procedures for seeking product exclusions.

Specifically, they will cover the following: