It could take years for our agriculture to recover lost foreign markets,’ say 61 agriculture groups.

The Agriculture Transportation Coalition and 60 other organizations representing growers of nearly every crop are calling on President Obama to take action to end West Coast port disruption to prevent further harm to U.S. farmers, ranchers and related companies.

The situation at the ports “is becoming increasingly dire for U.S. agriculture and forest-products exporters. Christmas trees are not being exported and will miss the holiday season in Asia completely. Potatoes are not being exported, and the cargo will likely be a total loss for the farmers whose entire year is dependent upon current shipments. Foreign customers are already canceling orders and turning to other countries to satisfy their needs,” the AgTC said.

The group continued, “It could take years for our agriculture to recover lost foreign markets.”

“We are asking you to consider using all of the tools available to the federal government to help resolve this situation,” the organizations wrote in the letter to the president. “The situation is a direct threat to your own National Export Initiative.” 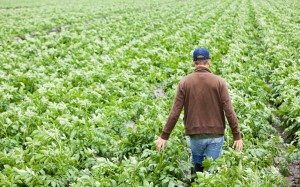 The AgTC said the consequences of port congestion, labor slowdowns and terminal closures “are being felt throughout the country. The railroads are unable to bring agriculture products from the Midwest and the South to West Coast ports because of the labor slowdown at the ports. At the same time, the ocean carriers are passing on their increased cost by imposing draconian congestion surcharge fees on the U.S. exporter, who cannot pass them on to the customer. It is rendering our agriculture and forest products non-competitive in the global marketplace.”

In the letter, the organizations wrote that “transportation constitutes a substantial component of the total landed cost of U.S. agriculture and forest products, and thus plays a critical role in determining the competitiveness of our U.S. exports in foreign markets.”

“The disruption at the ports has already caused millions of dollars in economic injury at precisely the busiest time for agriculture exports,” they continued. “The disruption is a result of marine terminals closing due to labor stoppage, ships being forced to skip port calls or to re-route, and truckers limited by endless lines at port gates. Agriculture products have a limited shelf-life. If shipments are delayed at the ports, the exporter risks losing the value of his entire shipment. And if products cannot be delivered on time to the foreign customer, the customer will source from other countries such as Brazil, Australia, Chile or Argentina.”

The letter lays out how eight different shippers — those dealing in potatoes, fruit, rice, hay, meat and poultry, and even agricultural chemicals — are being injured by the port problems.

The agriculture groups urged the president to reach out to the International Longshore and Warehouse Union and Pacific Maritime Association “to insist that they immediately restore the ports to full operation while they continue negotiations. We also ask you to use whatever means you have at your disposal, including bringing in a federal mediator to help resolve the contract negotiations. As you know, federal mediators have been very helpful in past port contract disputes.

“Finally, should a strike or lockout occur,” they continued, “we encourage you to invoke the Taft-Hartley Act in order to keep exports moving and protect the U.S. economy.”