The Food and Drug Administration has announced a new strategy describing how it is integrating new and existing import oversight tools as part of a comprehensive approach to food safety.  An important aim of the agency’s strategy for the safety of imported food is to assure Americans that food imported from abroad is held to the same food safety requirements as food produced domestically. In fact, the FDA claims that in 2019, between 14 and 15 million shipments of imported food are expected to enter the United States.
To help meet U.S. consumer demands for a diverse, abundant and affordable supply of food options, the United States imports about 15% of its overall food supply.  A 15-year trend of ever-rising import volume points to continuing increases, with other countries now supplying approximately 32% of the fresh vegetables, 55% of the fresh fruit, and 94% of the seafood that Americans consume annually.

In response to the new challenges and increase in food imports, the FDA Food Safety Modernization Act was enacted in 2011, and gave the FDA expanded authority to mandate additional preventive controls as well as new and supplementary oversight and enforcement authorities. FSMA also specifies distinct roles for importers, manufacturers, third-party auditors, foreign regulatory bodies, and others.

Sandler, Travis and Rosenberg states, “The FDA’s new strategy aims to help determine the best way to use these tools across the different segments of the international food supply chain in ways that decrease public health risks while maintaining a level playing field for domestic and foreign producers. Its goals are to prevent food safety problems in the foreign supply chain prior to entry into the U.S., effectively detect and refuse entry of unsafe foods at the border, and rapidly respond to unsafe imported foods. More broadly, the strategy seeks to create an effective and efficient food import program.”

(1) preventing food safety problems in the foreign supply chain prior to entry into the United States,
(2) effectively detecting and refusing entry of unsafe foods at the border, and
(3) rapidly responding when FDA learns of unsafe imported foods.
(4) to create an effective and efficient food import program. 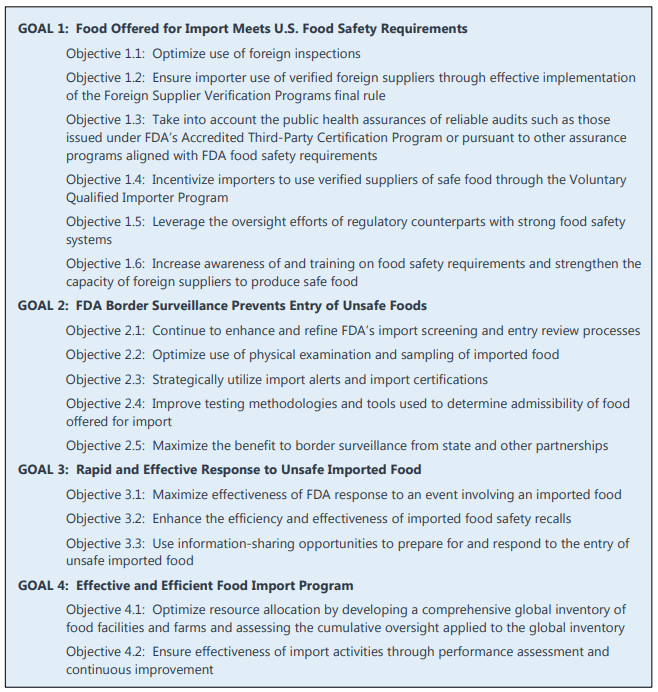