Flights at Chicago O’Hare and Midway grounded due to Fire…

Now they are proceeding and at a Reduced Rate

All flights in and out of Chicago O’Hare and Midway were halted after a fire at the Federal Aviation Administration Air Traffic Control Facility in Aurora, Illinois (near Chicago, Illinois).

According to MSN, “authorities said the blaze was intentionally set by a contract employee of the Federal Aviation Administration and had no ties to terrorism.”

Over 800 flights were canceled, but again this was not a terrorist act.  The FBI, the Bureau of Alcohol, Tobacco, Firearms and Explosives, and local police and fire departments are investigating.

According to the BreakingNews.com, the FAA updated at 11:00 am that flights to and from Chicago O’Hare Airport were resuming “at a reduced rate” and places already in air can proceed. 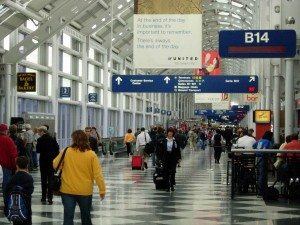