Liner carriers in the transpacific say they will begin to impose a $1,000-per-FEU surcharge on Monday.

Mario Cordero, chairman of the U.S. Federal Maritime Commission, said he’s concerned about announcements over the past two days by many ocean carriers stating they will begin implementing congestion surcharges by Monday and is questioning their ability to start imposing the charges immediately on in-transit cargo.

On Friday, the Transpacific Stabilization Agreement, whose members include 15 of the largest container carriers moving cargo between the United States and Asia, said “earlier this year shipping lines individually published congestion charges specifically to cover labor-related service disruptions. Beginning Nov. 17 carriers will assess and collect their respective charges on an individual basis for eastbound and westbound cargo.”

The charges amount to $1,000 in many cases, and some carriers are citing labor issues as the reason for imposing the tariff.

The Pacific Maritime Association and International Longshore and Warehouse Union are negotiating a new contract to replace a labor agreement that expired on July 1 and PMA has accused the ILWU of “slowdowns and work actions.” 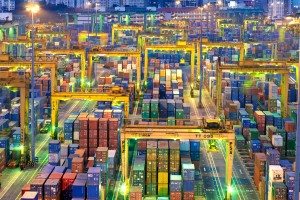 The letters to shippers announcing the surcharges vary from carrier to carrier, but for example, Mediterranean Shipping Co., the world’s second largest container carrier, told customers it “will implement a congestion surcharge for all cargoes discharged or gated in at USWC (U.S. West Coast) ports on or after Nov. 17,” citing a tariff that was filed back on May 20.MSC said the amount of the tariff will be $800 for 20-foot containers, $1,000 for 40-foot containers, and $1,125 for 40-foot high-cube containers.

Many other carriers have announced similar charges for inbound containers, which is relatively high when compared to the cost of moving a shipment across the Pacific. For example, the Shanghai Shipping Exchange polls forwarders and carriers each week on what the spot rate is for cargo moving from Shanghai to the U.S. West Coast. On Friday, Nov. 14, the exchange said that amount was $2,090 per FEU.  Carriers must give 30 days notice for rate hikes in their tariffs, and Cordero said by pre-filing they have met that requirement.

But in an interview today, he said they would not apply to cargo that’s already in California or in transit.

If a container is on a ship in the middle of the Pacific Ocean, he said his understanding was the “surcharge would not apply to that cargo.”Cordero was reiterating a position the FMC stated on May 29.

In an announcement on its website, the FMC said “the Shipping Act and the commission’s regulations require that the rules applicable to any given shipment shall be those in effect on the date the cargo is received by the common carrier or its agent. 46 CFR § 520.7. Thus, if any cargo-related disruption were to occur at a port after cargo has been tendered by a shipper, a carrier may only lawfully charge the rates in effect on the day the cargo is tendered. These regulations apply both to import and export cargo.”

Cordero also said if surcharges are appealed there could be questions about whether there actually was a slowdown and to what extent it took place.

“Is a 5 percent slowdown sufficient to declare this surcharge that amounts to $1,000 a box or a 50 percent slowdown? There is the ambiguity in terms of what has to be determined,” he said.

David Street, an attorney with GKG Law which represents the National Customs Brokers and Forwarders Association of America, said there is a requirement under the FMC’s regulations that tariffs be “clear and definite” and questioned whether the tariffs allowing the congestion surcharges meet that standard.

Peter Friedmann, executive director of the Agriculture Transportation Coalition, said other carriers are announcing congestion surcharges on exports that are different than those imposed on imports.

“Most are $240 per TEU and $300 per FEU, although one carrier says theirs will be $100. These follow the $850 per $1000 surcharges previously announced on import containers. Until this action, shippers and carriers were sort of ‘in this (port labor disruption) together,’” he said.

“With the announcement of these surcharges, that is apparently no longer the case. The carriers want the exporters and importers to subsidize their losses—who is going to subsidize the importers’ and exporters’ losses, which are significantly greater — lost or damaged cargo, rejected delivery and payment by the customer, etc.?” he added.

Asked about the surcharge announcements, Craig Merrilees, an ILWU spokesman, said “my initial thought is that this amounts to little more than a stunt to deflect attention to the root causes of congestion that lie with the carriers and companies who are imposing these fees but refuse to take responsibility for the mess they have created, the congestion they have created, and that they are the ones that have caused the chassis shortage, the driver shortage, mega-ships that overwhelm the port, and other factors within their control that are at the root of the congestion nightmare.”

Cordero said he is hopeful the ILWU and employers will rapidly agree on terms for a new contract.

In a letter to James McKenna, PMA president, and Robert McEllrath, president of the ILWU, on Thursday Cordero urged them to move quickly to a contract settlement and said “we must not underestimate the ramifications of service disruption on the entire shipping community and the national economy.”