Generalized System of Preferences (GSP) Due to Expire

Barring Congressional action, the Generalized System of Preferences (GSP), special program indicator (SPI) “A,” “A+” and “A*” will expire for goods entered or withdrawn from warehouse after midnight, December 31, 2017.

CBP is working to have programming in place that, in the event that GSP is renewed with a retroactive refund clause, will allow CBP to automate the duty refund process.

Post-Importation GSP Claims Made via PSCs and Protest

The pending expiration of GSP has no effect on goods entered with African Growth and Opportunity Act (AGOA) preference. Effective January 1, 2017, the Harmonized Tariff Schedule of the United Sates (HTSUS) was modified so that all non-textile, AGOA-eligible tariff items indicate SPI “D” in the “Special” column. As such, since January 1, 2017, all non-textile AGOA claims have been made using the SPI “D”. AGOA preference remains in effect through September 30, 2025, irrespective of any lapse in GSP.

Since the GSP does not provide an MPF exemption, its expiration has no impact on the collection of the MPF. Goods of least-developed beneficiary developing countries (LDBDCs) listed in HTSUS General Note 4(b)(i) maintain their MPF exemption per 19 CFR 24.23(c)(1)(iv).

Per 19 CFR 141.68(a)(2) & (3), time of entry can be as early as the time that the entry documents are filed, provided that the merchandise is within the port limits and such has been requested. For additional information on the significance of time of entry and how to calculate it, please see page 11 of the Informed Compliance Publication “What Every Member of the Trade Community Should Know About: Entry” available at www.cbp.gov/sites/default/files/documents/icp073_3.pdf.

Requests for the suspension of liquidation under 19 CFR 159.12 pending the pending the reinstatement of GSP will be denied.

What does this mean for you?

Anyone importing from the following countries that is currently claiming GSP,

and getting reduced and/or free duty will now be subject to duties.

We encourage the trade community to contact their legislators and ask that GSP be renewed.   Typically GSP is renewed through the use of a Miscellaneous Trade Bill (MTB) which is attached to another piece of legislation.  Historically once a new MTB is passed, it is done retroactively to the original expiration date, but this is not guaranteed.  Moreover, should the GSP expire, we would also encourage the trade community to push their legislators for retroactive treatment, as well.

The following countries are currently eligible for GSP 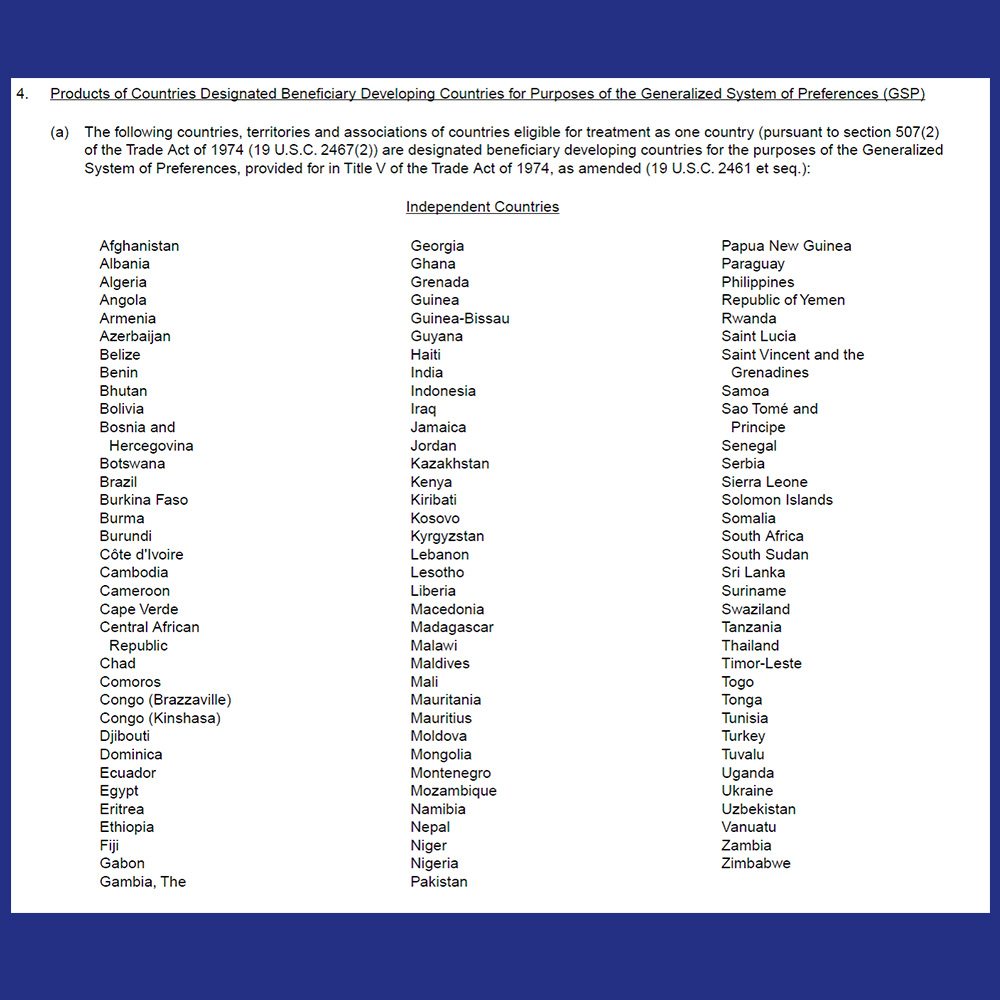 Questions concerning this guidance should be directed to the Trade Agreements Branch at FTA@dhs.gov.

You may also contact our experts by emailing info@scarbrough-intl.com.