Prime Minister of Canada, Stephen Harper, broke ground in Inuvik on January 8, 2014 marking the construction of a new highway to the Artic.  The highway will extend the Dempster Highway, also known as Yukon Highway 5 & Northwest Territories Highway 8, through to the Artic Coast. 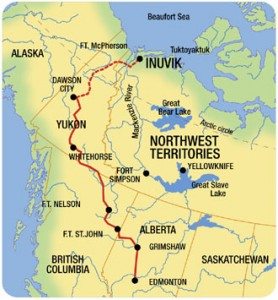 Much of the highway follows an old dog sled trail, and was originally built for oil and gas exploration in the late 1950s.  The Dempster Highway is Canada’s only wall-weather road to cross the Arctic Circle and it was officially opened in 1979.

The extension of the highway, called the Inuvik to Tuktoyaktuk highway, has a budget of $200 million.

“I am tremendously proud that our Government’s investment in this job creating, all-season Inuvik to Tuktoyaktuk highway will, for the first time by road, connect and unify Canada from sea to sea to sea. This historic project realizes the visionary initiative of Canadian Prime Minister John Diefenbaker back in the 1960’s,” said Prime Minister Harper. “Prime Minister Diefenbaker knew then what our Government is undertaking today: constructing a highway will improve the lives of people living in the North for generations to come, facilitating economic development, creating jobs and enabling cost-effective, safe and reliable transportation of goods to and from Northern communities.”

To read more on the history, please click here.