It all started in 1937 with a frustrated truck driver.

McLean had started a small trucking company a couple of years before and was hauling cotton bales between North Carolina and Hoboken, N.J. At that time, ports operated much the way they had since ancient times. Cargoes were broken down piece by piece and then reloaded onto ships, a time-consuming and expensive process.

The entrepreneur with a high school education started thinking about a better, quicker way. Over the next 15 years, McLean built his trucking company to become the fifth largest in the nation, with extensive operations on the East Coast. He eventually came up with the idea of a detachable trailer that could be loaded on ships.

In 1956, using an adapted World War II oil tanker he rechristened the “Ideal X,” McLean loaded 58 of his new containers aboard for a voyage between Port Newark, N.J., and Houston.

When asked that day what he thought about the departing ship, a top union official with the longshoremen, knowing full well the looming downside for his workers, replied, “I’d like to sink that son-of-a-bitch.”

McLean’s innovation took off, and now 14 million containers are being shipped around the world on a fleet of about 5,000 container ships.

McLean, who died in 2001, was named “Man of the Century” by the International Maritime Hall of Fame, but his contributions remain little known by most people. Levinson said his work revolutionized the world’s economy.

“Containerization did away with cargo handling and gave rise” to the intermodal chain of ships, trucks and trains, he said. “It put cargo into standardized containers that could travel on any conveyance pretty much anywhere in the world. 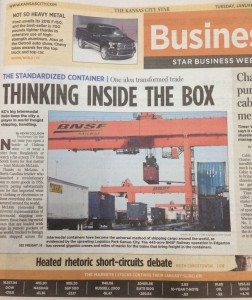 Containers are the foundation of a fascinating business for people like Adam Hill, vice president of operations at Kansas City-based Scarbrough International. The firm works with clients around the world arranging the shipment and delivery of containers packed with goods.

“It absolutely is fun; something changes every day,” he said. “If you ask people in the office about their job they’ll say, ‘I talk to China every day.’

“We also have to know what the weather is in every part of the world. If there’s a hurricane in Japan, it can cause delays everywhere.”

A container departing from Shanghai takes on average 12 to 14 days to complete its voyage to the Port of Los Angeles. Once in Los Angeles, it takes about three days to unload the shipping vessel and load the containers on a train.

Once the containers are loaded on the train they make their way to BNSF’s new intermodal facility in Edgerton and usually arrive within five days. The containers are then ready to be picked up for customer delivery to their final destination or distribution from the growing number of massive warehouses opening in the Kansas City area.

“We move one ton of freight 500 miles on a gallon of diesel fuel. That’s four times more efficient than a truck,” said Joseph Lumbert, senior manager for hub operations at Logistics Park Kansas City. “Being part of an environmentally friendly way to transport goods is one of the things I’m proud of.”