ILWU, PMA Agreement has been Made

ILWU, PMA Agreement has been Made 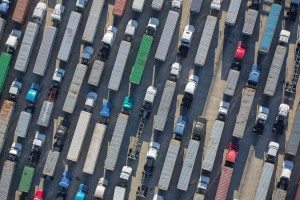 It has been announced that the West Coast dockworkers represented by the ILWU and the Pacific Maritime Association (PMA) have reached a tentative agreement late Friday night, February 20, 2015.  While it is welcomed by parties both locally and across the nation, it is just the first step down a long road of recovery clearing the West Coast Port Congestion.

“The Port of Oakland stated Friday in a press release that it will take Oakland and other West Coast ports six to eight weeks to recover from the cargo backlog. Some industry analysts might say that is an ambitious schedule, given the magnitude of the cargo and vessel backlog at West Coast ports. Some say three months is a more realistic goal.”  [Source]

Luckily, with Chinese New Year, time is on their side and should help give the ports a running start to cleanup backlogs.

One must keep in mind the other issues that have added to the port congestion, including the megaships with additional capacities that began coming into port over the past year.  The West Coast ports have their work cut out for them considering new efficiencies to cater to these ships.  Furthermore, there is still a chassis problem and Teamsters representation issue.

“The truck drivers who haul containers on and off the docks at the Ports of Los Angeles and Long Beach are breathing a collective sigh of relief with the news that the ILWU and the PMA have reached a tentative contract. Because the vast majority of port truck drivers are misclassified as independent contractors, every day that the ports are shut down, the drivers have gone further into the financial hole because they are paid by the load, and – even when the port is shut down – the boss has continued to deduct the cost of the truck, insurance, and even parking of the company truck at their own yard from their paychecks.”  The truckers are beginning to fight back and demand the respect they deserve. [Source]

When will we see a finalized contract?

“Furthermore, the tentative contract must now be ratified by the memberships of the ILWU and the PMA, a process that can take several weeks. In past contracts that were marked by work slowdowns, the ILWU did not immediately return to historical productivity levels. This time, the ILWU and PMA reportedly committed to return to full productivity and manning levels immediately. The coming week should determine if both sides are serious about their commitments.” [Source]

What does everyone else have to say about it?

“We congratulate the ILWU and PMA for finally coming to agreement on a new labor contract. It is now time for the parties to quickly ratify the deal and immediately focus on clearing out the crisis-level congestion and backlog at the ports.

“We also thank Secretary Perez and the administration for engaging the parties on this critically important economic and supply chain priority.

“The congestion, slowdowns and suspensions over the last few months have had a significant economic impact on the entire supply chain and those who rely on the West Coast ports to move their goods and products around the world and throughout the country. The agricultural, manufacturing, retailing and transportation industries have all suffered due to the nine-month long contract negotiations.

“As we welcome today’s news, we must dedicate ourselves to finding a new way to ensure that this nightmare scenario is not repeated again. If we are to truly have modern international trade, supply chain and transportation systems, we must develop a better process for contract negotiations moving forward. We must commit whatever resources necessary to ensure that this will not happen again.”  [Source]

Another interesting story involves Softline Home Fashions President, Jason Carr and Pacific Play Tents Executive V.P., Brian Jablon.  The both speak about the impact of the labor dispute at West Coast ports on their businesses.

They go on to say that most retailers rely on JIT delivery, so the Port Congestion Situation has impacted them greatly with delays on average 14-16 days.  The port delays have cost retailers $3.8 billion dollars this year so far.”

According to Softline Home Fashions President Jason Carr , “There are about ½ a million containers sitting on the vessels waiting to berth. This will be at least a 2-3 month resolution/delay.”

So what will happen when the East Coast contracts expire in 2016?