Union disputes claims that West Coast container docks are too congested to unload ships at night.

While the International Longshore and Warehouse Union and Pacific Maritime Association continued contract negotiations in San Francisco Thursday, the war of words between the two organizations continued with ILWU International President Robert McEllrath complaining the PMA is threatening to shut down West Coast ports, bargaining in the media, and distorting the facts.

Referencing remarks made by Jim McKenna, PMA’s president and chief executive officer, during a press conference and video yesterday, McEllrath said, “What the ILWU heard yesterday is a man who makes about one million dollars a year telling the working class that we have more than our share.

“Intensifying the rhetoric at this stage of bargaining, when we are just a few issues from reaching an agreement, is totally unnecessary and counterproductive,” he added.

In a message to the union’s members yesterday, McEllrath said, “The Coast negotiating team continues to meet in an effort to reach a fair contract that provides security for its rank-and-file and stability for the industry, despite the propaganda and threats from PMA. I urge the membership to stay strong and united and ignore PMA’s propaganda. Together we will prevail.”

The ILWU said, “In mid-January, PMA claimed that there was a lack of dock space for containers, and it eliminated nightshifts at many ports.” 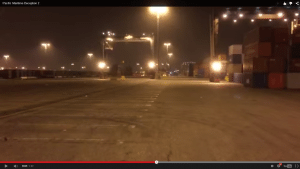 Today, the union provided the media with photos it said disputed the employer group’s assertion that West Coast docks are too congested to unload ships and show “large tracts of space that would easily fit thousands of containers.” It did not provide exact identification of what terminals the photos show, but said many were taken in Los Angeles and Long Beach. ILWU Local 13 has also posted a video on its website that it says shows empty space at container terminals.

{Photo is from the video posted on ILWU 13 website}

“PMA is leaving ships at sea and claiming there’s no space on the docks, but there are acres of asphalt just waiting for the containers on those ships, and hundreds of longshore workers ready to unload them,” McEllrath said. “The employers are deliberately worsening the existing congestion crisis to gain the upper hand at the bargaining table.”

McKenna’s remarks that employers might be forced to lockout workers in five to 10 days also drew criticism from the ILWU.

“The employers’ threat to shut down West Coast ports is a reckless and unnecessary move,” McEllrath warned. “What the employers need to do is stay at the negotiating table and work through a few remaining issues with the workers who have made them successful for the past 80 years. We are very close to reaching an agreement.”

McKenna said Wednesday there are a few issues on which the two sides are far apart and other issues “we are just dealing with. It’s probably 50-50 on the six that are open.”

Once again, the ILWU drew attention to the fact that many PMA members are foreign-owned.

A Hawaii state legislator expressed concern that his state could be facing shortages of food or other goods due to the slowdown at West Coast ports.

“Negotiations between the Pacific Maritime Association (PMA) and the International Longshore and Warehouse Union (ILWU) have grinded to a halt, with the PMA indicating it could be five to ten days away from a lockout. As a result, Hawaii could be facing extreme delays in shipments of goods and empty store shelves,” Sen. Sam Slom said in a statement.

Slom said, “A lockout on the West Coast would be devastating to Hawaii. It would result in food and household goods shortages, and could have serious economic effects for Hawaii, including affecting our number one industry, tourism. Because the parties have no obligation to arbitrate, the battle between the PMA and ILWU is getting out of control. It is time for our President of the United States and our unheard from congressional delegates to get involved and use the power of their offices to take this in hand and clear the congestion in West Coast ports.”

McKenna, however, when asked Wednesday about the situation in Hawaii, said domestic trades “have not been impacted to a measurable degree.”

Jeff Hull, a spokesman for Matson Line, said that while there is always concern in an island economy about any sort of disruption to shipping services, Matson ships have had only minimal delays for perhaps a half day or day because of labor issues and some of those may have been cause by weather. He also noted that in 2002, when West Coast ports were shutdown during a lockout, there was an exemption for the Hawaii trade and that was likely to happen again.

But a resolution that Slom plans to introduce in the legislature Friday says, “American Samoa has not had a ship from the West Coast in over one month; and local Hawaii stores are already feeling the effects of the slow down with shelves sparse and produce being disposed of because it is too spoiled to sell; and a lock-out may result in Hawaii receiving no West Coast freight, resulting in a lack of food and basic supplies and a huge disruption to the economy and severely impacting Hawaii’s tourist sector.”