There are plans for expansion for ports in Indonesia. Currently, the port in Makassar, city with a population of 1.4 million plans to be the new hub for Eastern Indonesia.  “The project will be jointly finances by Pelindo, the local government and private sector investors,” which will invest almost $700 million dollars and look to double their container handling capacity from 600,000 TEUs to 1.2 million TEUs (twenty equivalent unit).

To contextualize that number, Shanghai processed 32.5 million TEUs in 2012, Los Angeles processed about 8 million and Jakarta about 6.5 million. 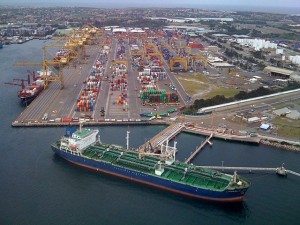 Indonesia is an archipelago and 75 per cent of its territory is sea.  This single country has over 14 per cent of the world’s total coast line: a truly maritime nation.  There are over 300 ports – scattered across the territory, of which the four largest are the ports of Jakarta, Surabaya, Belawan and Ujung Pandang.  Inter-island shipping is the prevailing means for distributing goods through the ports (as opposed to rail or road).  And about 90% of Indonesia’s external trade is transported via seaports.