Kansas City Southern has teamed up with oil product distributor Global Partners LP to build a major oil train terminal in Port Arthur, Texas that will import crude from Western Canada, the companies said in a statement.

The terminal, which will initially be able to accept up to two trainloads of oil each day, would be one of the largest of its kind in the United States and could nearly double the amount of viscous Canadian crude sent to the U.S. Gulf Coast for refining.

The project will be built on a 200-acre (80-hectare) plot leased by Global from Kansas City Southern, construction permits pending. The companies did not give a timeline for start-up. 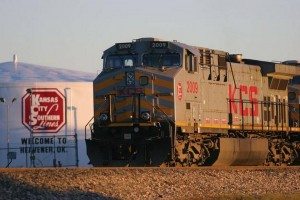 It represents an opportunity “to capitalize on strong demand for the movement of Western Canadian crude initially to one of the world’s premier refining centers in the U.S. Gulf Coast,” said KCS President and Chief Executive David Starling.

The terminal is part of a wider move by North American energy producers and railroads to ship oil by train as pipelines lag growing output in remote regions. From nearly none in 2008, there are now about 90 oil-by-rail projects in various stages of development in the United States alone. Trains carry about 1 million barrels of U.S. oil daily.

A typical train exclusively carrying crude can hold around 70,000 barrels, making this terminal’s potential around 140,000 barrels per day (bpd), one of the biggest in the United States. Running at capacity, it could nearly double the average 150,000 bpd of Canadian crude that already heads to the U.S. Gulf Coast. (Reuters)