Kansas City and St. Louis are both mentioned in the Top 10 Best site selections for Logistics. 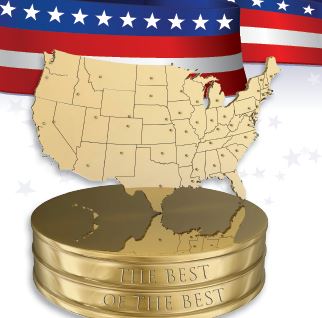 Kansas City and St. Louis  are both mentioned in the Top 10 Best site selections for Logistics.

Thanks to its intermodal parks, central location, and highway, rail, and waterway infrastructure, Kansas City has been a transportation hub for decades. In recent years, it has also become a hot spot for site selectors interested in developing distribution centers. In fact, within the past five years alone, an average of 4 million square feet of speculative space has been added in the area, according to KC SmartPort, a nonprofit economic development organization.

Kansas City market size totals approximately 225 million square feet, and its current vacancy rate is about 7.5 percent. The area also has 2.5 million square feet of net absorption, as roughly 4.6 million square feet is under construction. In response to steadily rising demand for land, KC Smartport represents the 18-county region’s logistics sector. In particular, it helps freight-based clients, including companies that specialize in distribution and warehousing, understand the region’s supply chain and how it compares to competing cities, so that they will consider the area for future developments.

“What differentiates KC Smartport is that it is a logistics group, so it is a natural choice for logistics companies,” says Chris Gutierrez, president, KC Smartport. “It works for investors, and was created by, funded by, and is focused on the supply chain sector.”

“Although we work as the lead for most projects, from time to time we also follow the direction of the organization that brought us the project,” Gutierrez says. “When this occurs, they lead the project during the entire process, while we provide assistance until it is completed.”

ST. LOUIS: THE GATEWAY TO THE WORLD

St. Louis is often referred to as the “Gateway to the West.” But perhaps that description no longer applies, especially as the city’s central location—within 500 miles of 30 percent of the U.S. population, according to the St. Louis Regional Chamber—continues to attract logistics site selectors from all over the country and around the world.

“The confluence of the Mississippi, Missouri, and Illinois rivers in one metropolitan area in the middle of the United States, combined with a temperate climate, are gifts that St. Louis residents have leveraged,” says Jim Alexander, vice president, economic development, St. Louis Regional Chamber. “It makes perfect sense to have built six major inland ports, six Class I railroads, four U.S. interstates, and two international airports with two foreign trade zones. After all, St. Louis is not only the Gateway to the West; it is also the Gateway to the World.”

Aside from its wide selection of transportation modes, the St. Louis region also provides logistics site selectors a variety of economic benefits, including a lower-than-average cost of living, when compared to the U.S. median, and a favorably ranked Business Tax Climate Index (for the state of Missouri). It also offers the ninth-lowest business location cost of large U.S. metro areas, according to the St. Louis Regional Chamber.

At the same time, the area also offers a substantial logistics labor force—more than 90,000 professionals are employed by 6,800 firms in the wholesale trade, transportation, and warehousing fields—as well as a reputable educational system that features four-year institutions such as Washington University and Saint Louis University, each of which offers undergraduate and graduate degrees in supply chain management.

In response to each of these site selection assets, the St. Louis Regional Freightway, an organization that works closely with private industry and state, regional, and local economic development agencies and government officials to increase economic growth throughout the region, was developed. Since its founding, the organization has served three primary purposes: To foster and lead economic growth in the region’s freight industry sector; to further develop the region’s freight industry through public and private infrastructure projects and freight-related investments; and to market the region’s wide array of transportation modes.