Truck drivers who haul goods from the nation’s busiest port complex in Los Angeles and Long Beach are expected to stay home Monday in a long-running labor dispute.

The results of a weekend vote from Teamsters were set to be revealed and could lead to a partial work stoppage at the ports, officials said. The Southern California ports are the primary West Coast gateway for hundreds of billions of dollars of annual trade with Asia. 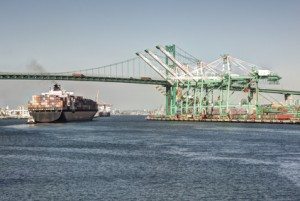 It was too soon to say what, if any, effect a work stoppage would have on business, said ports representatives. Earlier this year, tough contract negotiations with dockworkers nearly closed 29 seaports from San Diego to Seattle, causing major delays in the delivery of billions of dollars of imports and exports.The drivers have been subjected to “persistent wage theft,” said Teamsters spokeswoman Barb Maynard.

Trucking companies have argued that driver pay is good and picketing at the ports did not represent the majority of drivers. They object especially to the timing of the unrest as the port is still recovering from a dockworkers strike.

710 Fwy to Remain Closed Through Monday

“I believe now is a horrible time to introduce any slow-downs to the supply chain,” Weston LaBar, executive director of the Harbor Trucking Association, said in a statement late last week. “If they want to be a part of the real solution perhaps they should suspend these efforts until we get closer to a normal flow of cargo in the San Pedro Bay. We don’t want to put any more jobs in our region in jeopardy.”