Please be aware of the interruption of regular operating conditions at many Los Angeles and Long Beach terminals after a fire broke out at the Pasha Warehouse facility in Wilmington, CA early Monday, September 22nd in the evening.

“All container terminals at the Port of Los Angeles were shut down, a nearby school was evacuated, and area residents were advised to stay indoors as a precaution over concerns about air quality from a stubborn fire Tuesday at a Port of Los Angeles wharf. The eight terminals likely will remain closed until the night shift begins at about 5 p.m., port spokesman Phillip Sanfield said. He estimated a few thousand employees, mostly longshore workers, were sent home. At the twin Port of Long Beach, three of six cargo terminals were shut down, City Manager Pat West told City News Service.” [Source]

Dense smoke has created an unsafe operating environment and forced the temporary closure of numerous terminals, including: 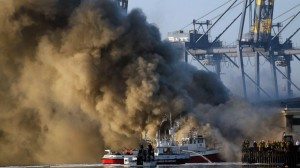 Since we cannot predict nor control the duration of the closures, we will not be able to immediately advise the extent of any delays that will be incurred to your cargo moving through the area.  One known steamship line – APL will extend the freetime of affected shipments by the amount of time that the situation directly causes through terminal closures due to this incident.

We regret the inconvenience(s) caused as the result of this situation, but we will continue to monitor the situation.  Please email your direct customer service representative with any questions.