Largest Containership Ever to Call USA

Largest Containership Ever to Call USA

It will be the largest containership to ever call any port in the United States, and North America for that matter.

Until now vessels of this size have been deployed exclusively on Asia-Europe trade routes. Their enormous size and carrying capacity, more than 18,000 20-foot containers, has earned them a reputation as ‘mega-ships’, or more officially Ultra-Larger Container Ships (ULCSs). 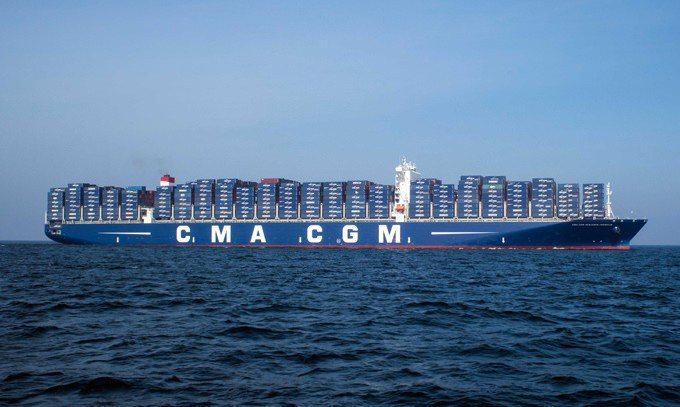 CMA CGM says the Benjamin Franklin will be deployed on the Pearl River Express, a regular service connecting the main China ports, including Xiamen, Nansha and Yantian, with Los Angeles and Oakland.

The company says it has been working closely with the ports to ensure there is sufficient infrastructure to support a 18,000 TEU vessel.

At the port of Oakland, millions have been in invested in recent years to prepare the port for big ships such as the CMA CGM Benjamin Franklin. Improvements have included dredging berths and channels to 50 feet, raising the height of ship-to-shore cranes, and modernizing marine terminals to handle higher volume. The port authority there describes the upcoming call as a “trial-run” to ensure that the vessel can be berthed and cargo discharged efficiently.

“Nothing this big has ever been seen in our country,” said Port of Oakland Executive Director Chris Lytle. “There’s no doubt others will follow suit and we’re gratified that Oakland is one of the only ports in the U.S. ready to receive them.”

The CMA CGM Benjamin Franklin was constructed in China by the China State Shipbuilding Corporation and delivered earlier this month. The vessel, with capacity to carry 18,000 20-foot containers, measures 399 meters long by 54 meters wide, making it among the largest in the CMA CGM fleet and the 10th largest in the world by carrying capacity.

The vessel will make its maiden call at APM Terminals-Pier 400 at the Port of Los Angeles.