Word on the street is that there are talks that the U.S. is considering a regional trade plan for the Americas.  In addition to the United States’ negotiations on separate free trade deals with Asian and European countries, the “deals,” will hopefully inspire international trade.  According to the Miami Herald,

“U.S. Secretary of State John Kerry said in an interview that he would like to first seek an agreement to deepen the existing North American Free Trade Agreement (NAFTA) with Mexico and Canada, and to expand it afterward to the rest of Latin America.”

NAFTA will turn 20 years old in 2014.  Looks like 2014 will be the year to re-launch the concept.  Luckily, Scarbrough has a dedicated NAFTA Team that is available 24/7 along with weekly trucks between the borders.  NAFTA’s “re-launch” has already taken place at Scarbrough and we’ve got the expertise to help companies import and export with Canada and Mexico.

In order to spread “free trade” across the Americas, U.S. Secretary of State, John Kerry mentioned that the Obama Administration would start to reach out to the rest of Central America, The Caribbean and Latin America first.  Then they would try to work with South American countries, which are hesitant in some cases to create closer commercial ties with the United States.  The last time that a trade bloc was proposed to countries in South America was 2005, which did not get anywhere.  But since, there have been separate trade deals with Peru, Colombia and Panama.  Obviously, all of these countries can specifically add up to create a major regional free trade deal in the West Hemisphere.

If the Trans-Pacific Partnership and Transatlantic Trade & Investment Partnership negotiations both are agreed upon, several major Latin American countries will still be sitting outside of the bloc, such as Brazil, Argentina and Venezuela.

So, why NOW?  Why the Focus on Latin America? 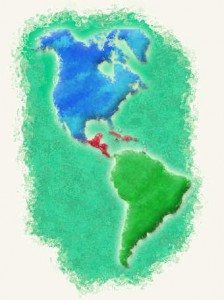 According to the Miami Herald, “Kerry’s remarks about his intentions to explore a re-launching of NAFTA came in the context of a question of why the Obama administration has been the first one in many years that has not proposed a hemispheric trade agreement, and why he has personally spent so little time in Latin America.”

Our team here at Scarbrough supports any efforts that aid economic trade with the United States, especially with our 2 biggest trading partners – Canada and Mexico.  Scarbrough held a recent seminar on “Doing business with Mexico,” which helped our customers understand new laws, compliance, and shipping with Mexico in general.  We plan to continue to educate the community and always welcome your ideas.  Please don’t hesitate to ask how you can get more involved with your NAFTA and Latin American shipping options.