The U.S. and Mexico, which have nearly $600 billion in annual trade, just launched the first new rail link between the two countries in more than 100 years.

The West Rail Bypass International Bridge will connect the border cities of Brownsville, TX, with Matamoros, and will facilitate freight between the two countries, the U.S. Commerce Department said. 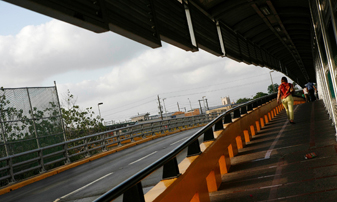 “The West Rail project, which broke ground in December 2010, was designed to expand regional transportation capacity, improve air quality and alleviate urban congestion by re-routing rail traffic out of the most populated areas in both border cities,” according to a Commerce statement.

Mexico is the third-largest bilateral goods trading partner of the U.S., according to the Office of the U.S. Trade Representative.