Container terminals at the Port of New York and New Jersey are fighting a seemingly unending battle with congestion that has accompanied record import volume and is producing costly delays for truckers and cargo owners. It was the latest and arguably most severe manifestation of delays that have plagued the port for weeks.  Both recently have begun handling larger ships, including extra vessels that carriers have deployed to cope with recent gridlock at West Coast ports. 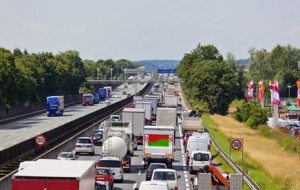 “It’s volume. They’ve taken on more business than they can handle. The emperor has no clothes,” said Tom Heimgartner, president of drayage operator Best Transportation. He said he’s paying drivers for unproductive waiting time, and that terminals balk at waiving demurrage or extending free storage time for containers.