As of Monday evening, the Port of Houston remained closed due to the continuation of oil cleanup work underway in the shipping channel.  The Coast Guard reported that there are 46 outbound vessels and 47 inbound vessels in the queue for transit in the Port of Houston, while the Port of Texas City has five inbound and three outbound vessels in the queue awaiting transit.  “Once the channel has been determined safe to navigate, and transiting vessels will not spread oil contaminants, a prioritization list will be established to determine the entry order of vessels,” the agency said.  On Saturday, the bulk ship Summer Wind collided with a barge containing 924,000 gallons of fuel oil that was being towed by Kirby Inland Marine’s vessel Miss Susan. The Coast Guard estimated about 168,000 gallons of oil spilled into the water from the ruptured barge.

As part of the cleanup, more than 71,000 feet of containment boom has been laid around the spill site. An additional 192,500 feet of boom is also staged for possible deployment and another 20,680 feet ordered. “Changing currents, winds and weather conditions have necessitated response officials to further extend oil recovery plans into the Gulf of Mexico and south along Galveston Island,” the Coast Guard said.  The agency said 27 response vessels are working to skim and recover oil, with more than 539 personnel on-scene and another 218 responding in the Coast Guard’s command post.

More on the Oil Spill by U.S. News 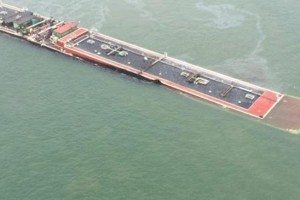