Our nation’s freight transportation system is a vast, complex network of almost SEVEN MILLION miles of highways, local roads, railways, navigable waterways, and pipelines. The components of this network are linked to each other through thousands of seaports, airports, and intermodal facilities. This system accommodates the movement of raw materials and finished products from the entire spectrum of the agricultural, industrial, retail, and service sectors of our economy.

Just this past weekend, Secretary Foxx released the draft National Freight Strategic Plan (NFSP). He was joined in making the announcement by Senator Maria Cantwell (D-WA). The plan is now open for public comment and can be accessed online here.

According to USDOT, the NFSP aims to describe the freight transportation system and future demands on it; identify major corridors and gateways; assess physical, institutional, and financial barriers to improvement; and specify best practices for enhancing the system. The 143-page NFSP outlines six identified key trends and challenges, as well as strategies to address and meet these challenges. The plan also includes a map of a proposed Multimodal National Freight Network (MNFP) that incorporates ports, border crossings, rail lines and highways.

Check out the Interactive Map here.

You will probably need the User’s Guide, but you can also wait for future integration with this type of information on Scarbrough’s own website. 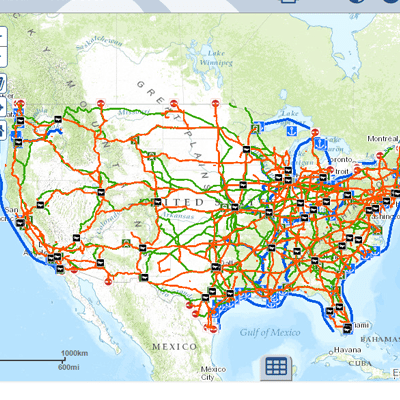 We are the only tri-national network of North American governments, businesses, and educational institutions, driven by a common interest in collaboration along commercial corridors and trade networks. Founded in 1994, we encourage North America’s competitiveness in the global marketplace.