The Longshoremen’s union is getting ready to do to LA/Long Beach what the UAW did to Detroit. By wrongly assuming that port operators can be extorted because the Pacific Ocean can’t be moved, the ILWU is badly overplaying its hand. Mediation from Washington may help settle things before they deteriorate into an open strike/lockout, but much of the damage is already done. 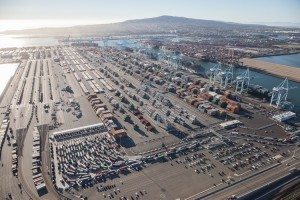 Old school trade unionism hangs on the idea that taking physical control of production assets is a good way to force management concessions. This approach worked in the industrial 20th century when gigantic factories were built around natural features like rivers, mineral deposits and ports. The story of this bygone era was one of well paid, secure jobs steadily wrested from capitalists through painstakingly slow, albeit strategic collective bargaining. It worked in the midlands and shipyards of Britain as well as the industrial heartland of the United States.

But the unions went too far and slowly but surely, capital moved away leaving Detroit, Sheffield, Cleveland and Newcastle starving for any kind of economic dynamism. Undeterred, big labour continues to believe in short sighted hostage taking as a means to deliver steady employment to their members. The problem is that real value, and therefore power, is not tied up in physical assets so much as it is in ideas which are very easy to move.

This may seem not to apply to the ports of Long Beach and Los Angeles, especially when the ILWU has a grip on the coast all the way from Seattle to San Diego, but in fact, the shift has already started. In the last week alone I have heard from one a huge food company about outbound shipments that can’t get to Asia, a small retailer about apparel that can’t get in, and a big US tech manufacturer about finished goods stuck at sea. They are all losing money now.

The reaction however is in no way centered on planning for higher costs of transport through west coast ports. All are thinking in terms of avoiding the ports altogether. For tech and apparel makers this means rebalancing their global manufacturing footprint away from China and toward either domestic production in the US or more investment in Mexico, Latin America and even the Caribbean.

It’s trickier for food producers, but rail and road networks can certainly get California produce and meat to the gulf coast easily enough where a widening of the Panama Canal offers decent future access to Asian markets.  Add in the long term considerations around water shortages in the western US and global food producers like the one described above will soon have a decent business case to shift their bets to South America and Canada.

Megatrends Work against the ILWU

Today’s global supply chain is incredibly agile and emerging technologies will keep feeding this trend. Automation and robotics are expanding everywhere which means low cost labour offers much less of a competitive advantage than twenty years ago when China first took over global manufacturing. Digital technologies also allow manufacturers to separate production steps like software configuration and testing from machining and assembly so that standard product platforms which ship slowly and cheaply can be finished just before sale to the end customer. Such postponement strategies work for electronics, industrial equipment and medical devices.

Even crazy sounding stuff like 3D printing, internet of things (IOT) and big data are working against the longshoremen. 3D printing can be used for everything from autoparts to clothing, much of which currently comes from Asia via the west coast. IOT includes precision sensors and analytics that dramatically improve water efficiency in agriculture, cold chain security in distribution and even freshness monitoring for produce. And big data means far more detailed analysis of exactly where and when to make bets on inventory in the supply chain.

The net effect of all this is that global supply chain strategists are already designing their way around the west coast port bottleneck. Chances are good that traffic through LA/Long Beach has already peaked and is now in decline.