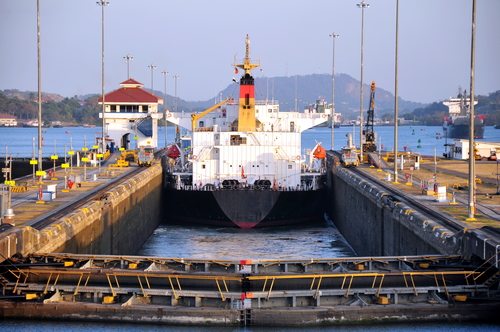 For more than 100 years, the Panama Canal has served the world’s maritime trade industry—shortening time and distance between producers and consumers. Panama’s leadership in transportation dates as far back as the 16th century, when gold, silver and precious metals mined from Peru were consolidated in Panama and shipped to Spain, and when merchandise coming from the Old World and the Indies—such as household goods, spices and clothing—was sold to attendees of the Portobello annual fair.

{Photo Source:Depositphotos.com/karelstudio}
Today, Panama has become what many characterize as the logistics and transportation hub of the Americas. The waterway connects 144 routes and 1,700 ports in 160 countries, moving approximately 6.7 million TEUs annually. With the Canal as the base and core artery, Panama has also become a leader in transshipment—the process by which goods or containers are shipped from one intermediate destination to another—which has expanded its access to approximately 500 million consumers in North, South and Central America, as well as the Caribbean.

The majority of the cargo that makes its way to Panama by sea arrives at its final destination through transshipment. The process often begins as vessels call at either end of the Canal and unload cargo at one of Panama’s various ports, such as the Pacific-facing Port of Balboa or the Atlantic-facing Ports of Cristobal and Manzanillo.

Once unloaded, cargo is then transported through 39 feeder services, which transport the cargo to nearby markets in smaller vessels. These smaller vessels are able to accommodate lower-draft ports and travel to cities with lower cargo demand. Some of the freight unloaded in Panama receives value-added services, such a labeling, sorting or packaging, which is then sent to its final destination—mainly Latin America and the Caribbean—ready to be sold.

Panama’s railroad system is also a major aspect of transshipment. The inter-oceanic rail system, which spans more than 45 miles and provides fluid connectivity between the Atlantic and Pacific Oceans, allows for cargo to be moved inland to ports from the Atlantic side of the Canal to the Pacific, or vice versa, in just one hour.

Panama is also home to the Colon Free Zone and various logistics parks, which offer companies the opportunity to store and sell their inventory and expedite their shipments due to the country’s proximity to foreign markets within the Americas. In these logistics parks, companies such as Payless ShoeSource and Ace Hardware can store inventory before it is distributed throughout Latin America. Inventory can reach destinations in just days due to the frequency of feeder services, favorable business conditions and flexible requirements.

The Colon Free Zone doesn’t apply import duties or quotas for imports and exports, and there is no taxation on profits generated from re-exportation. The growing globalized trade market in Panama makes the country an appealing station for multinational companies looking to access lower-risk emerging markets.

With the newly expanded Panama Canal to open in mid-2016, Panama’s transshipment options will only grow as Panama’s long-standing tradition of service to world trade continues to flourish as well. The country’s robust transshipment system offered to the international maritime industry is the key to the Canal’s success. Panama’s recent development makes it the ideal timing for companies to consider the country in their supply-chain and distribution networks.

Looking forward, Panama will continue to consolidate its position as the transportation and logistics hub of the Americas, connecting trade routes, serving neighboring economies and providing shippers with a wide variety of goods and value-added services.