Some 52 million gallons of fresh water are used each time a ship makes a trip through the Panama Canal. The water comes from Gatun Lake, which was formed during the canal’s construction by damning the Chagres River. With an area of more than 163 square miles, Gatun Lake was once the world’s largest made-man lake.  {Fact Source: History}

As demand is rising for efficient global shipping of goods, the canal is positioned to be a significant feature of world shipping for the foreseeable future. However, changes in shipping patterns—particularly the increasing numbers of larger-than-Panamax ships—will necessitate changes to the canal if it is to retain a significant market share. In 2006 it was anticipated that by 2011, 37% of the world’s container ships would be too large for the present canal. [source: Wikipedia]

The current plan is for two new flights of locks to be built parallel to, and operated in addition to, the old locks: one east of the existing Gatun locks, and one southwest of the Miraflores locks, each supported by approach channels. Each flight will ascend from sea level directly to the level of Gatun Lake; the existing two-stage ascent at Miraflores and Pedro Miguel locks will not be replicated. The new lock chambers will feature sliding gates, doubled for safety, and are 427 m (1,400 ft) long, 55 m (180 ft) wide, and 18.3 m (60 ft) deep. This will allow the transit of vessels with a beam of up to 49 m (160 ft), an overall length of up to 366 m (1,200 ft) and a draft of up to 15 m (49 ft), equivalent to a container ship carrying around 12,000 containers, each 6.1 m (20 ft) in length (TEU). 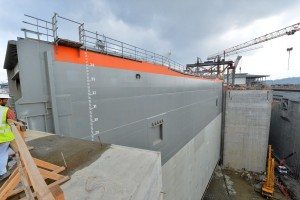 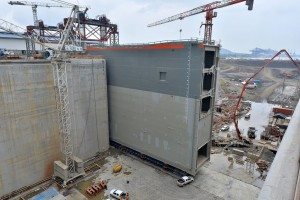 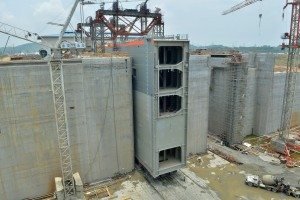 The new locks will consequently use 7% less water per transit than each of the existing lock lanes. The deepening of Gatun Lake and the raising of its maximum water level will also provide capacity for significantly more water storage. These measures are intended to allow the expanded canal to operate without constructing new reservoirs.

The new locks are expected to open for traffic in 2016. The present locks, which are 100 years old, will then be able to give engineers greater access for maintenance, and are projected to continue operating indefinitely.

In January 2014 a contract dispute threatened the progress of the project. There was a delay of less than 2 months however, with work by the consortium members reaching goals by June 2014.

The penultimate gate of new locks on the Pacific was inserted on 16 April. This is number seven of the eight corresponding to the Pacific. Its dimensions are 57.6 meters wide by 10 meters long and 33 meters high. It weighs 4,232 tons.

The gates of the Third Set of Locks were manufactured in Italy with structural steel and arrived to Panama in four installments that began on August 20, 2013. After insertion, begins a process of electromechanical connection with other elements of the locks.

On the Atlantic side, all gates are placed in their respective niches, while on the Pacific just need a to be installed.