Panama Canal: Shippers May Have to Curb Their Enthusiasm

Panama Canal: Shippers May Have to Curb Their Enthusiasm

With the expansion of the canal scheduled for early 2016, many shippers are hoping that ocean cargo efficiency will be greatly enhanced. However, experts are of mixed minds on whether this will indeed be the panacea all industry stakeholders are seeking.
{Photo Source:Depositphotos.com/zigzagmtart} 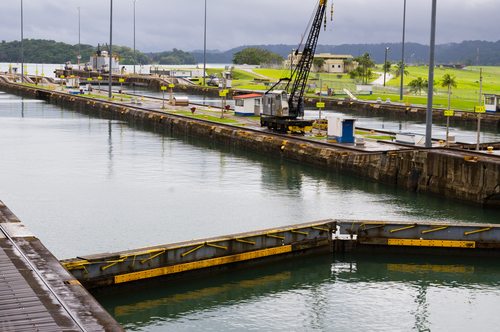 “To evaluate environmental impacts of these infrastructural enhancements, one must first look to emissions at the ports, starting with the ships themselves” — James Corbett, University of Delaware School of Marine Science and Policy

ILWU and its “myths” revealed

Port infrastructure must be strengthened against hurricanes, says ULI

Following labor disruptions on the U.S. West Coast in late 2014 and early 2015, as well as less dramatic port congestion issues in Europe and Asia, delays to containerized cargo movement have been a subject of understandable interest. Shippers have been lead to believe that the pending expansion of the Panama Canal will increase velocity while providing them with more vessel deployment options in their supply chains.

Not so fast, caution industry analysts, who note that shippers should consider that clear incremental spending will be moving in a timeline along with inventory carrying costs.

“Ocean cargo flowing through the Canal can take from 10 days to 20 days longer, generally, than using rail from the West Coast,” says John Morris, leader of industrial services for the Americas at commercial real estate firm Cushman and Wakefield. “Those extra weeks—especially for high-end luxury and electronic goods—represent additional expense. This can mean lost sales from limited store shelf.”

Furthermore, says Morris, West Coast ports can protect market share by improving their overall productivity—especially now that dockworkers finally have a new contract. “Generally, these ports have a distinct geographic advantage,” he says, “but some are more efficient than others. Market share within this context will be a relative measure of overall performance.”

And while the congestion problems of 2014 were especially acute on the West Coast, analysts observe that no U.S. port is invulnerable to this crisis. The Port of New York/New Jersey, for example, was backed up during Peak Season due to a sudden shift in redeployed vessels from the trans-Pacific. The Port of Virginia, meanwhile, was not prepared for violent weather-related events that snarled terminal operations.

“Unexpected surges in cargo volumes can be a problem,” says Chris Koch, president of the World Shipping Council, “especially if efficiency standards at terminals are inconsistent. Vessel operators may also have poor cargo stowage planning, and may not keep a reliable sailing schedule.”

As a consequence of the “hyper-globalization” of trade over the past two decades, ocean shipping costs have been dramatically reduced, notes Michael Nacht, a professor of public policy at the University of California at Berkeley. He predicts that this trend will continue, and that widening of the Panama Canal can be viewed within the “past-is-prologue” paradigm.

“Balance sheet investments by ocean carriers in bigger, faster, more fuel-efficient ships, new infrastructure investments by ports, newly completed intermodal rail investments, and continued exploitation by all of IT and mobile communication advancements will continue the long run in secular decline in shipping costs,” says Nacht. “But absent a significant increase in trade volume, this cost decline will be accompanied by potentially lower profit margins, lower revenues, or both, for all participants in the supply chain.”

At the same time, maintains Nacht, the canal expansion is likely to have a significant—and perhaps even a surprising—impact on global trading patterns. But forecasting short-term and medium-term timing is “uncertain” because of the complexity of shifting operational and pricing strategies by numerous players seeking competitive advantage.

“Most key players are studying their options intensively to optimize their financial returns,” he concludes.