Port congestion is not confined just to the US west coast
Excerpt from Transport Intelligence  |  By:  Mike King  |  November 13, 2014 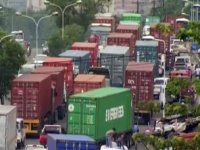 With fears of a union shutdown of US west coast ports intensifying already serious trucking and labour shortages and causing delays at some terminals of up to three weeks, it is easy to forget that supply chain managers on the transpacific trades are also beset by port congestion issues in Asia.

Forwarders and shipping lines contacted by Ti report delays of variable lengths at terminals at Incheon, Korea, while Shanghai and Qingdao in China have also suffered recently from congestion. In Vietnam, efforts to divert cargo to vacant terminals Cai Mep and expand draft and berthing capacity at Ho Chi Minh City have not fully released the pressure on the city’s Cat Lai complex. And in Hong Kong shippers have been left dismayed by container line congestion surcharges when they believe the delays are caused by the strategies of the lines themselves.

But as the Philippines builds up to the holiday season, Manila remains the Asian port struggling the most. Unusually for Asia where most major hubs are export-oriented, Manila primarily struggles with an imbalance of import containers which at peak periods can outweigh export flows by up to 5-1. This year the pre-holidays import rush has come just as the port’s main terminals are struggling with backlogs caused by a city ban on trucking, one which lasted from February until September and caused chaos.

This ban has now been lifted but the port is still subject to a national ban on trucks which means pick-ups and drop-offs are not possible from 6am-9am and from 5pm to 9pm, making clearing out empties difficult.

Shippers using Manila now face congestion surcharges from some lines on top of delays that can last almost three weeks.

The diversion of cargo to the port of Batangas which is located some 60 km south of Manila has resulted in terminals there suffering their own congestion issues.

With no end in sight to Manila’s capacity issues and backlogs expected well into 2015, the supply chain bottleneck is now impacting investor confidence in the country as well as the financial performance of its leading transport service providers.

It was in this scenario that ICTSI reported its results for the first nine months of 2014. Benefitting from the global uptick in container volumes, the port operator saw a 17% year-on-year increase in group container throughput, a 25% jump in revenues and a 14% surge in EBITDA.

However, the Manila-based company relies heavily on the performance of its flagship MICT facilities and this proved dire. “Excluding the volume from the company’s new terminals, organic volume growth was minus 1%, principally due to the negative effect of the truck ban and related congestion issues at MICT,” reported ICTSI.

Expect other transport and logistics companies with a strong Philippines presence to suffer similarly.