Drivers tell LA Harbor commissioners that they are unhappy with lack of progress since July protests.

Port drivers who set up picket lines at container terminals in the Port of Los Angeles and Port of Long Beach in July to demand recognition as employees instead of independent contractors say they may go on strike again.

Several drayage drivers threatened renewed protests while speaking at a meeting of the Port of Los Angeles Harbor Commissioners on Friday. They expressed frustration with the lack of progress in meeting their demands after agreeing to a cooling-off period in a deal brokered by Los Angeles Mayor Eric Garcetti.

The drivers claim they have been misclassified as independent contractors. 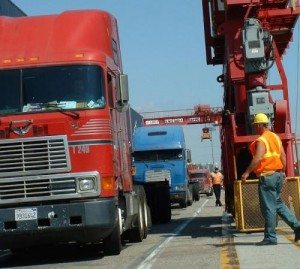 said that port drivers stopped their protests in July based on a promise that the city would look into their claims. She said the drivers are thinking about going back on strike because nothing has been done about the issue.

Pacific 9 Transportation Driver Julio Cervantes said the drivers sometimes make less than minimum wage and “something has to change.”  Despite taking down picket lines, he said, recently trucking companies “have been making our lives difficult, they start charging us for truck repairs from three years ago.”   He said sometimes charges to drivers are so large they get “negative paychecks.”

Cervantes continued, “I don’t know why it is taking you so long to prove they are evading labor, employment and tax laws since everyone — the IRS, U.S. Department of Labor, the National Labor Relations Board, California Labor Commissioner, California Economic Development and even now the federal judges — have figured out.”

He asked, “If you keep not doing anything you are helping the companies to exploit us. Please help us?”   Barb Maynard, a spokesman for the Teamster-affiliated Justice for Port Truck Drivers, said a decision about the timing of a renewed strike for drivers in the Port of Los Angeles and Port of Long Beach  is still under consideration.

Last month, in a case brought by the National Labor Relations Board, a U.S. District Court judge ordered the two drivers employed by Green Fleet Systems reinstated to positions they had before they were fired. The judge also granted a temporary injunction ordering the company to cease and desist from engaging in unlawful acts, such as threatening employees with job loss or other types of reprisals if they engaged in union activities.

On Oct. 30, the U.S. 9th Circuit Court of Appeals refused a request by Green Fleet to stay that action.   The Teamsters has called the case a “landmark victory.” 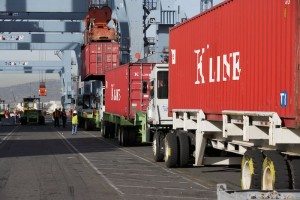 Amilcar Cardona, one of the Green Fleet drivers, said he has been reinstated as an employee and not as an independent contractor, and asked for help in preventing companies from mis-classifying drivers as independent contractors when they are employees.  He told the commission he wanted them to know that the drivers may go on strike again very soon.

Agustin Cuevas, another Green Fleet driver, said the truckers determine their salaries and schedules.   “If I’m my own businessman, how can somebody tell me what to do?” he asked.  Robert Brandon of the San Pedro Democratic Club told the commissioners that port drivers are “a vital part of the distribution chain, but they are treated like indentured servants.”

After hearing from the drivers, Commissioner Patricia Castellanos said, “This continues to be an outrage — that this is still happening not just months after the mayor called for a cooling-off period, but even before then, and that drivers are still having to experience these conditions.”

She continued, “I cannot in good conscious ask these drivers to be patient.”

Gene Seroka, executive director for the port, said that he believes a “vital part of our commercial activity revolves around the truck community” and said the congestion the port is currently facing “can only be helped if we have a solid truck community creating jobs that pay fair wages.”

He said the harbor department has been working with both sides and is pushing for “plausible solutions” and that there are areas where the port can “step up and provide leadership and that is what we intend to do.”

“We will find ways to help,” he told the drivers.