The Port of Los Angeles, the largest U.S. container cargo facility, announced testing of a load-matching service that is designed to speed container cargo shipments through the port.The agreement was made with Cargomatic Inc., a Venice Beach, California-based company that also is advancing efforts to match package and less-than-truckload shipments after it was launched last year.

The initial target is 1,000 container moves per week. Last year, Los Angeles port terminals handled more than 80,000 loads on average each week. Cargomatic markets its highway shipment approach as similar to Uber’s ride-sharing service. The port service, known as Cargomatic “Free Flow,” is designed for participation by any cargo owner, motor carrier or owner-operator. “We’re an operating system,” said Chief Operating Officer Brett Parker, a co-founder of Cargomatic. “We provide the technology and do all the coordination between shippers and carriers so cargo can get where it needs to go.”

The new program is being offered at the West Basin Container Terminal, with participation by terminal operator Ports America. Customers served include retailers such as Williams Sonoma. Cargomatic checks drivers to ensure proper licensing, insurance and other qualifications, including compliance with the Uniform Intermodal Interchange and Facilities Access Agreement, which is managed by the Intermodal Association of North America. 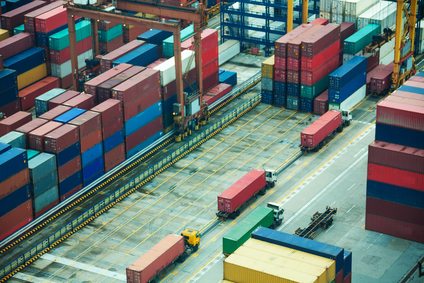 The port’s statement said a smartphone is used to document the pickup and delivery, with rates set by Cargomatic, which committed to paying the drivers or companies in eight to 15 days. The program also includes other Los Angeles area cargo terminals and the Port of New York and New Jersey, according to the California port’s statement.

Steps to speed cargo shipments by private companies and trade groups previously have focused on other portions of the shipping process, including chassis management and gate procedures. Congestion and delays peaked earlier this year during the latter stages of contract talks between the Pacific Maritime Association and the International Longshore and Warehouse Union.
{Photo Source: Depositphotos.com/serrnovik}

Slowdowns preceded labor talks and persisted because of the advent of larger ships and vessel-sharing that has taxed terminal-handling capability. “We have forged an important relationship between Cargomatic and the Port of Los Angeles that will help our city effectively compete in today’s technology-driven marketplace,” said Los Angeles Mayor Eric Garcetti. The load-matching move was announced amid other attempts to improve shipment handling.

Earlier this month, Sen. Cory Gardner (R-Colo.) introduced legislation that would give state governors, rather than the president, the ability to help resolve port labor disputes by intervening to impose a settlement. Presidential action wasn’t used to resolve the most recent talks that consumed more than nine months, but a tentative deal was reached after Labor Secretary Tom Perez told the parties to settle or face having the talks moved to Washington from San Francisco.